Instructions for a Heatwave

Instructions for a Heatwave by Maggie O'Farrell (2013) 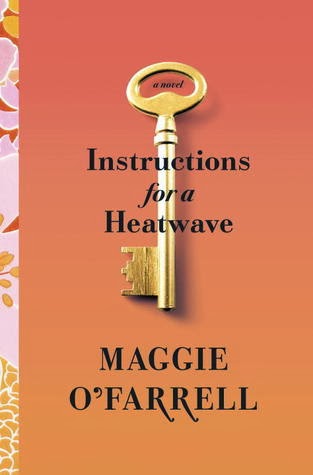 One morning Gretta Riordan's husband goes out to get the paper and doesn't return. Her children then gather at her house for the first time in years to offer support and try to get to the bottom of their father's disappearance. Michael Francis is married with children of his own, but his marriage is precarious. Aoife returns from New York where she is desperately trying to manage a job and a relationship, while protecting a lifelong secret she won't be able to hide for much longer. Monica, the favorite, is in her second marriage and disliked by her stepdaughters. She and Aoife haven't spoken since a terrible fight three years before. Despite all their troubles the children come together to search for clues in their father's disappearance, all during the worst heatwave Britain had seen for years.

Set in 1976, the family doesn't have the benefit of the internet or cell phones so the clues come slowly. This great for the reader, who can now bask in O'Farrell's gorgeous prose while soaking up all the back stories in this fascinating and troubled family.

Everybody in this novel has secrets and those secrets destroy bits of their lives. The biggest of all, of course, is the one that makes Robert Riordan leave home that day. What was most fascinating, I think, was the way that this family (and many families) talk to each other, or don't. Important stories remain untold, certain situations unexplained. It's probably common, but here it is elevated to something quite artful.

It's not hard to see why their communication is so poor. When Robert first goes missing, Gretta calls one of her kids and starts prattling on about the key to the shed being missing. She off-handedly mentions that if she had any idea where Robert was, she'd have the key, and that's how her family learns that their father is gone. But Gretta isn't a scatterbrain; she's an Irish Catholic mother, stern and quick to judge, just maybe taking a few too many prescription drugs.

While I enjoyed most of the characters, my favorite by far is Aoife. Her situation is precarious and while her family saw her as kind of a mess, she is in fact doing a remarkable job of hiding the fact that she can't read. (This comes up very early in the book so is not a spoiler.) She has made a life for herself far from her family, working for a photographer she greatly admires, and is in a fledging relationship. But all could be lost if her secret is found out. Aoife is vulnerable and misunderstood and I just loved her.

Have I mentioned that Maggie O'Farrell is brilliant? I may have in my reviews of The Vanishing Act of Esme Lennox and The Hand That First Held Mine. She comes up with a great idea for a story, usually involving family secrets, and then tells it with beautiful language, multi-dimensional characters and a strong atmosphere. She's been around for a while but only now finally gaining popularity in the US, and it is completely deserving. If you haven't tried her books yet, you're in for a treat!
Posted by 3goodrats at 8:16 AM