The Wise Heart: A Guide to the Universal Teachings of Buddhist Psychology by Jack Kornfield (2008) 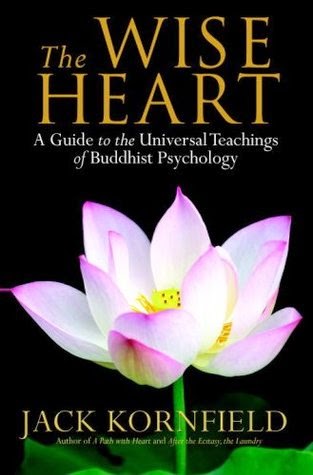 While visiting my aunt in the fall, we were talking about books, as we do, and she highly recommended this book about Buddhist psychology. I was skeptical - I am probably the least spiritual person on earth - but I do trust my aunt, who tends to like books that I like, and I'm always open to hearing good advice. I needn't have worried about the more spiritual aspects; the author won me over early with his explanation that Buddhism isn't really a religion because Buddha was actually a person (not a deity) and it's more about a way to look at the world. Furthermore, his intention is to present Buddhism in a way that makes sense in our lives, since we don't all live in forest monasteries and spend all day meditating.

I've taken this book very slowly, spending almost three months reading it. It isn't the sort of thing you ingest in one sitting. It's not a story, though it contains a lot of them. There are a lot of ideas to think about and suggestions for practice; things to do to integrate Buddhist teachings into your life.

The basic principles are pretty easy to understand, like mindfulness and compassion for all things. Recognizing that our moods are impermanent is another idea that we would all do well to remember. Letting go of the ideas of who we are makes sense when explained in context. Someone who strongly identifies, for instance, as a manager is going to be in trouble when they go home at night still clinging to the manager role. Family members will probably not appreciate that. Similarly, someone who identifies only as a parent will have a tough time if they bring that identity to work. We are less restrained if we don't cling to these identities so strongly. Much of what I read, especially early on, reminded me of some of the more work-related self-help things I've read, such as Emotional Intelligence.

Kornfield lost me a bit later on though, with the Buddhist personality types, which I just found way too simplified (there are only 3 types.) Even later, he gets downright mystical and describes the expanded consciousness that can be achieved with the help or peyote or LSD (which he characterized as misunderstood.) There is nothing here I want to apply to my life, though I did find it entertaining. It all reminded me a little of The Teachings of Don Juan by Carlos Castenada, which I read in high school. (For a class, yes. Crazy.) But this was all in one or two chapters. Most of The Wise Heart was more useful for gaining a healthy perspective on our lives and problems.

I must admit that I kept having visions of Lisa Simpson while reading this because, previously, most of my knowledge of Buddhism came from the Simpsons. I think of Lisa as sort of a kindred spirit and I kept hearing her voice in my head reading the principles of Buddhism. It was very familiar and comforting.

I bought this copy and it is thoroughly dog-eared and marked up because I found lots of good advice in it, most of which is pretty sensible. I'd recommend it to anyone who wants a fresh outlook, or a more healthy perspective. It's not for everyone, but probably a surprising number of people would find it helpful if they gave it a chance.
Posted by 3goodrats at 9:00 AM