Yes Please by Amy Poehler (2014), narrated by the author 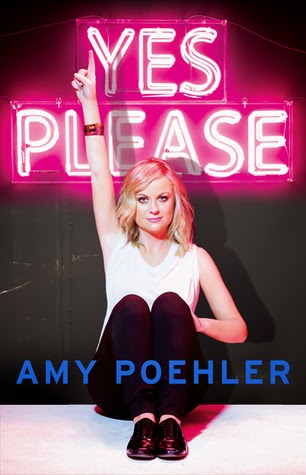 I'm always drawn to strong, successful women and even more so if they are funny. Although I'm not a big tv watcher, I really enjoyed Amy Poehler on Saturday Night Live and in the movie Baby Mama. Given how much I enjoyed Bossypants by Tina Fey, I was really looking forward to her good friend Amy's book. Spanning her life so far from childhood through the formation of the Upright Citizens Brigade and her time on SNL and Parks and Recreation, Poehler also included stories from her personal life, including marriage, divorce, and motherhood.

It was not off to a promising start. The first two short chapters of reflection about writing the book and how hard it was and how she came up with the title felt long and rambling. Not long after was an entire chapter about how she once made a joke on SNL at the expense of a little girl with cerebral palsy, received a chastising letter about it, and then proceeded to ignore it for several years until finally she apologized. She includes all the correspondence including a letter from the girl in question. My impression was that she spent a lot of time convincing herself that she should feel guilty, until she finally did, and the whole thing ended up feeling very preachy.

I think what annoyed me the most was that when she describes the incident she explains what it went down the way it did, and then apologizes for making excuses. No, you are aren't making excuses, you're telling us why someone who wouldn't intentionally make fun of a disabled girl did exactly that. How has analyzing something to find out why it happened and how you feel about it turned into "making an excuse"? It all just rubbed me the wrong way, like she was just trying really hard to be politically correct. She spent way too much time talking about it, and now I have, too.

But the book gets better as Poehler talks more about her childhood in Burlington, MA, her waitressing jobs, and her comedy career. She's only a couple of years older than I am, so I fondly remembered along with her the time when everyone seemed obsessed with scoliosis and we didn't have answering machines. Yes, those were the days. I even liked hearing about Parks and Recreation even though I've never watched it. She really does have some good stories.

When sharing the early years of her career, she says something that I've already quoted her on in conversation, which is this:

"I think we should stop asking people in their 20s what they want to do and start asking them what they don't want to do. Instead of asking students to declare their major we should ask students to list what they will do anything to avoid. It just makes a lot more sense."

Right? It makes total sense. But what we do is say, hey, the whole world is open to you! Which is the one thing out of the thousands of possibilities that you want to do? How is anyone supposed to answer that question?

On the other hand, she also says something I found surprising coming from her. Curiously, she says "I firmly believe that every boy needs his mom to love him and every girl needs her dad to pay attention to her." All I could think was, I guess love is too much for a girl to hope for from her opposite-gendered parent. She didn't explain this comment either, so I was left perplexed and a bit miffed.

All in all, I'd say it was a mixed bag, though despite how complainy this all sounds, it was more good than bad. It's just that the things I disliked are pretty specific and memorable. More generally, it wasn't as funny as I expected, but I mostly enjoyed listening to it. The print version contains some pretty amusing photos, which are worth looking at, but even so I think I'd recommend the audio. For one thing, she reads the book herself and unsurprisingly does a good job at it. But she also has some guest narrators, like Seth Meyers, Kathleen Turner, Patrick Stewart and her parents. There's a little bit of banter that I imagine isn't in the print book, and it was quite entertaining.
Posted by 3goodrats at 9:00 AM