Back in early 2009 I received a very pretty set of crocheted dish cloths from my friend, which I posted about here. Here they are again, in case you don't want to click through: 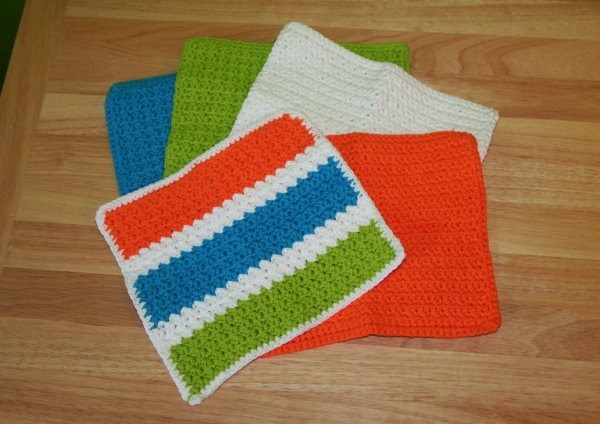 It's just about 6 years later and these guys have seen a lot of dishes. They're all starting to get holes in them so I know it's just a matter of time before I need to replace them.

I happen to have a decent amount of cotton yarn hanging about so I decided to knit a simple dishcloth, which I did a couple of months ago. Then I totally stalled before managing to do the crochet border. So a week or so ago I thought, you know what? It's about time I learned to actually crochet. None of this half-assed business of barely managing to do a shitty-looking border on a knitted thing, I'm going to learn to crochet an actual thing.

I finished the border and then made a single-crochet swatch for practice that happens to be the right size for a dish cloth. Here they are together: 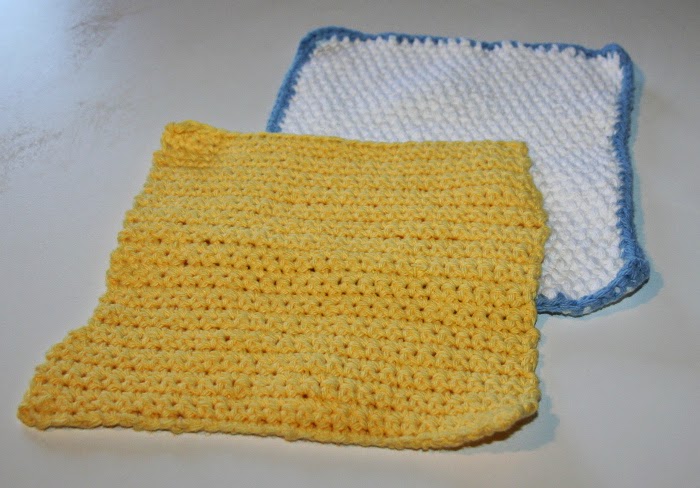 Ok, so I inadvertently decreased a few rows into the yellow crocheted one, but I'm pretty sure it will still wash dishes adequately. My plan was to whip up a few so I'd have a whole bunch to show you. But strangely, just as knitted things won't knit themselves, it seems that crocheted things won't crochet themselves either. One of these days I'm hoping to find some simple-but-varied patterns and make some more.

Then I plan to get really good at it, maybe as good as my coworker who whips up all kinds of fun and fantastical things in no time at all and who, one of these days, I fully expect will crochet a working TARDIS on her lunch break. I suppose it's unlikely I will ever approach her talent, but I hope to at least be able to make an afghan or some amigurumi animals.
Posted by 3goodrats at 3:00 PM