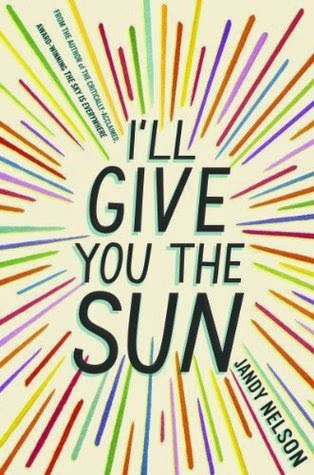 Twin siblings Noah and Jude are very close when they are 13. Jude is outgoing and popular and rather a daredevil, while Noah is more on the edge of the social scene, quietly falling for the boy next door. Both are talented artists and their mother is encouraging them to apply to an arts high school. Three years later they are barely speaking, Jude having retreated into herself, ruled by superstition, while Noah is now the "normal"one who plays sports and has lots of friends. And something has happened between each part of the story that changed both of their lives irrevocably. Each twin tells their half of the story until the full arc is revealed and they can find their way back to each other.

Everything about this book is wonderful and magical and you should immediately procure a copy and read it all in one sitting. The end.

Ok, if you want, here are a few more details. The story is about family and secrets and art and romance. There are actually a few romances in here and they are all great stories. You should know that this book contains the most amazing kissing scene ever.

The way it was structured is actually quite brilliant. Noah tells his side of the part of the story that took place a few years ago, and Jude tells her side of the current story. So, they each have half of the story, (and we too only have part of the story, though different parts) and to get it all, they basically need to get back together. I'm not explaining that well at all, but trust me when I say it works.

This is going to sound a little weird coming from me, who is incredibly rational, but I liked all the superstitions that Jude was obsessed with from her grandmother's book of wisdom. Jude lived by these rules. Like "To avoid serious illness, keep an onion in your pocket." And "If a boy gives a girl an orange, her love for him will multiply." There's also a lot of destiny and fate and other things I don't believe in, and yet it all worked really, really well for me in this novel. I can't explain it. (Though, as I said before, this book is magical.)

There's also a talking parrot who only knows how to say "Where the hell is Ralph?" and a reclusive artist who makes giant stone sculptures of people, and death-defying leaps from ocean cliffs, and an adorable British alcoholic.

Have I mentioned the tragedy? There is a very huge, heartbreaking tragedy at the center of this novel and its incredible sadness somehow makes the happy parts all the happier. You will feel all of the feelings.

I literally can't think of anything negative about this book, which makes it hard to review but easy to recommend. (I've already got one library patron excited to read it!) Those who like authors such as John Green and Rainbow Rowell will probably also love I'll Give You the Sun. I think the best review of this book was also the first one I saw, when another librarian said that the cover was an accurate representation of how she felt the whole time she was reading it. I couldn't agree more.
Posted by 3goodrats at 9:00 AM