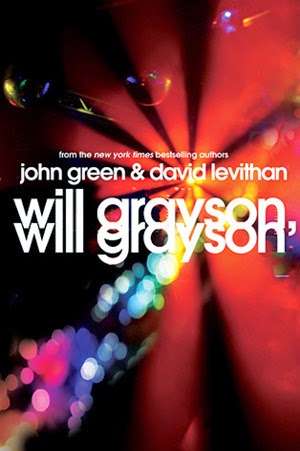 I last read this novel in 2011, and it was the first book I read by either of these authors. I have since read all of John Green's books and although I've only read one other by David Levithan I do plan to read more. You can see my previous post for a summary and my initial thoughts.

Reading it this time, I remembered very little about the book, like the fact that even though there are two Will Graysons, the whole thing is much more about Tiny Cooper. I did remember how much I love Tiny Cooper. He feels all of the feelings, which kind of makes up for some of the other characters who have trouble expressing themselves or choose not to. He's also more sure of himself than anyone else, and is there for the newly-met Will Grayson when he most needs someone, and does a great job of making him feel better. (I will heretofore refer to that Will as lowercase Will and the other as capital Will.)

This time around, one aspect of the story that really stood out to me was lowercase Will's depression. When Tiny first comes over for a visit, he sees Will's prescription meds. When Will explains that they are for depression, Tiny mentions that he too sometimes feels depressed. Will is inwardly very annoyed because, of course, feeling depressed sometimes is not the same as clinical depression. He also dislikes when people say they have to take a "mental health day" when they have no idea what it's actually like to have a mental illness. How awesome if it could be alleviated just by taking one day off. While lowercase Will's depression isn't the focus of the book, it was a pretty large part of his character and I guess I just noticed it more this time around. I've read other books recently in which mental illness plays a role and I've sort of begun looking for it in YA books. I actually liked that his part of the story wasn't focused on dealing with his depression; that was something already established that was just going on in the background like it actually does in so many real lives.

Similarly, although two of the main characters are gay, this isn't a coming out story either. For lowercase Will, it's true that he comes out to a lot of people around him, but he already knew he was gay and was fine with it, it's just that for quite a while he didn't think it was anyone else's business. Tiny has been out and proud for a long time and although it's a big part of who he is as a person, the story isn't really about that.

Primarily, it's a story about friendship, and about the many ways that people are terrible friends to each other. Remember high school? The lies and betrayals and drama? They are all here. Everybody is the star of his or her own life in the most exaggerated way possible because everything is such a big deal and they are all rather self-centered. Tiny gets so wrapped up in his romances and his musical that he'll ignore capital Will's calls. And capital Will is so intent on shutting up and not caring that he is also not a great friend to Tiny. The worst is the toxic friendship between lowercase Will and Maura, but although she is terrible to him it's really out of a desperate need for his friendship. It's all wonderfully complex and entertaining.

I've wanted my Not-So-Young Adult book group to pick this book for ages and finally, finally they did. Thankfully, they all liked it too. It's maybe not the very best book for discussion, as it doesn't have the heavy-hitting and complicated issues that some of our book choices do and which can spur debate and extensive conversation, but I think sometimes it's ok to just pick a fun book. Anyhow, we did find a decent amount of things to talk about, and I loved it just as much as I did the first time, so it was a success all around.
Posted by 3goodrats at 8:30 AM