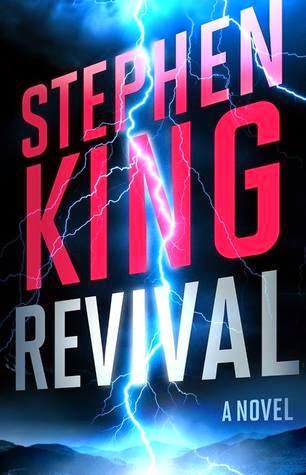 When Jamie Morton was just a kid in the 1960s, he was playing with toy soldiers in the driveway one day when a shadow fell over him. He looked up and saw the man he came to know as Pastor Charlie Jacobs, a man whose shadow would remain over Jamie even decades later.

Jamie grew up to become a musician and a drug addict, and he went through rough times and lost people close to him. Charlie also experienced loss and difficult times, but he always retained a fascination with electricity, and every time Jamie saw him he was using his strange electrical power in different ways. Whether he was using it for cheap tricks or to heal members of his new congregation he was obviously working towards something bigger, and the more Jamie learned the more fearful he became.

The way Stephen King describes his characters and their lives always brings me back to my childhood and, in fact, I read this while in Maine at my sister's house over Thanksgiving. (My family is just as rural and redneck as King's characters. We went skeet shooting after Thanksgiving dinner. No lie.) If you aren't from Maine, or somewhere similarly rural, you might not appreciate just how true to life his writing is. But he really gets it. I know Stephen King has lived his entire life in Maine, but he's more educated and far more wealthy than the people he's writing about, yet I don't think he's let his fame change him.

Science and religion are woven together through Charlie's evolving worldview. Early on, he explains religion as an extension of science because "science is finite." Later, after he has lost his faith, he uses religion as a cover because people will buy into it more than his weird science. It's sadly true, actually - people aren't willing to accept science they don't understand, yet they are willing to accept religious ideas that are much more far-fetched because of their faith. It's really kind of bizarre when you think about it.

I also liked the the concept of a "fifth business," someone who just keeps popping up at random times over the years, which is what Charlie Jacobs was to Jamie Morton. The very idea is somehow ominous, and here it was more so because Jamie knew that Charlie was up to something strange. I could kind of see where the story was going before it got there, but much about it was quite different than I expected. Through a lot of the book I kept thinking that it wasn't exactly a horror novel, but it is. It definitely is. Things happened near the end that made my blood run cold.

And I will leave you with that. It's Stephen King, and it's good Stephen King.
Posted by 3goodrats at 7:26 PM