Dead Wake: the Last Crossing of the Lusitania by Erik Larson (2015) 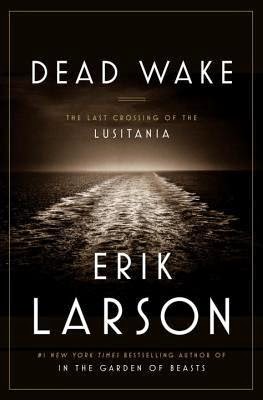 During the First World War, Germany was sending submarines to the waters around Great Britain, but passenger travel continued as nobody thought they'd try to sink a ship full of civilians. The Lusitania set sail from after warnings from the Germans about those particular waters, but even as the ship came closer and other vessels were attacked, nobody contacted the Lusitania to ask them to change their course. Tragedy struck when the ship was within a day of its destination.

The attack might seem inevitable, but Larson also takes us inside U-20, the submarine that torpedoed the Lusitania where we learn that's not so. It turns out that each submarine has very few torpedoes which they use sparingly, but even when they do the weapons frequently miss their mark. Not only was a great deal of luck involved in hitting the ship, but many small decisions determined the moment the Lusitania's path would cross with that of U-20, resulting in the perfect timing for the attack.

Larson pulls from a huge array of sources including archives, journals, and letters to craft his story, creating a narrative that reads seamlessly and is filled with people so well described they are easy to envision. It's almost like reading fiction. One especially poetic line reads, "The music and drinking went on into the night; the sea outside was cold, black, and impenetrable."* Isn't that beautiful? The people aren't all just passengers either - one memorable storyline was about Woodrow Wilson and his love life, a great stressor to him as he struggled to keep the United States out of the war. It took me a little bit to get into, but soon I was captivated and very tense. I was feeling some major stress about the fate of these people I had been introduced to, even though I knew this story would end in disaster and death.

One of my favorite things about the book was how Larson filled it with details about the time. For instance, near the beginning he lists many events going on elsewhere in the world, like the president of France visiting Tsar Nicholas II of Russia at his summer palace. Many English people were caught up in anticipation of Sir Ernest Shackleton's upcoming expedition to Antarctica aboard the Endurance. This sort of context is what I always miss when I learn about history, because each event is usually treated sort of like it took place in a vacuum.

Additionally, Larson mentioned crime being a big concern at the time, proving that things don't change as much as we think they do. In one case a man killed his son and then himself. In another, a man presented his girlfriend with an engagement ring, tied with a ribbon that he urged her to pull. The ribbon disappeared into his pocket and was attached to the trigger of a gun that then went off, killing him. When we hear news about crimes that seem especially cruel, it's tempting to wring our hands and lament about how bad things are these days, but clearly they've always been so. Another thing that hasn't changed is the need to place blame. After the Lusitania was sunk, many families of victims tried to place responsibility on the captain, or the company that owned the boat, when it was clear that the Germans caused the tragedy.

A great deal of research obviously went into this book, evidenced by the extensive notes in the back. My galley copy contained 10 blank pages where the index is to be, which will surely prove useful (I would have liked it a couple of times myself when trying to find some fact I had read earlier.)

Years ago I read Devil and the White City and loved it, so despite the fact I haven't read anything else by Erik Larson I was very excited when I heard about this forthcoming book. I was surprised to come home from work just a couple of days later to to find a copy of the galley on my doorstep. It was a little creepy. I am not one of those well-known bloggers who gets unsolicited advanced copies of books. I don't know who at Random House is reading my mind, but I'm very grateful to them.

Dead Wake is a meticulously detailed piece of history that will captivate anyone who is interested in history or just enjoys a good story. Full of rich detail and fraught with tension, it is hard not to get caught up in it. I'm inspired to go back and read more of Erik Larson's books.

I received my copy of Dead Wake courtesy of Random House. It will be published in March 2015. I was not compensated for this review.

*Note: this is an uncorrected proof; the final edition may have changes from my version.
Posted by 3goodrats at 7:59 PM