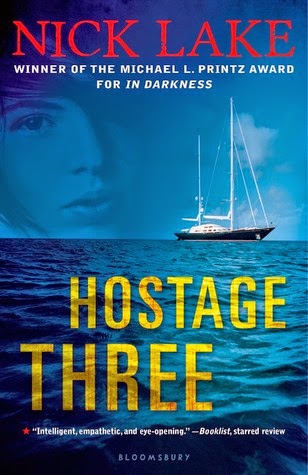 Amy wasn't especially excited about spending the better part of a year on a yacht with her father and stepmother. Her father was so wrapped up in his work all the time he had never really been there for her, and Amy still resented how quickly he remarried after her mother's death. But on the boat she just keeps her distance as much as possible, putting on her headphones to tune everyone out. Things turn considerably worse, however, when the yacht is boarded by Somalian pirates and Amy's family and the crew are taken hostage. Weirdly though, as they're all killing time waiting for the ransom to come through, Amy gets to know one of the pirates and begins to have very conflicting feelings about these dangerous strangers.

I just need to get this out of the way - that cover is weird. On my copy the face is barely visible; in fact, I didn't actually realize it was there until I saw this version. So, don't be put off by the big ghosty face on the cover, which I assume is supposed to be Amy (who doesn't look like that in my head.) This is the only negative thing I have to say about this book. Let's move on.

You may remember that Nick Lake also wrote In Darkness, which was one of my top picks for 2014. Hostage Three is SO different, but also really good, and unusual but in a totally different way. I became engrossed in this past-faced story quite early and found it to be a page-turner all the way through.

I think what stands out the most is this meeting of the incredibly rich and the incredibly poor. That is kind of a ridiculous observation since that's obviously what happens when Somalian pirates attack a yacht. But I like how that was such a focus, how Amy got to know her captors enough to understand why they would go to such desperate measures. The Somalian pirates in this story aren't just troublemakers and criminals; they are complicated people who are poor and desperate and have had many options taken from them by people not unlike Amy's family. They are doing what they have to do to survive.

Amy's privilege isn't lost on her either. She mentions that she got a diving license at her school, emphasizing "I went to that kind of school" to assure us that she knows there are other kinds. Her family weren't snobs though, which was nice. As she got to know one of her captors, Farouz, she realizes that despite their very different life situations, they have some things in common. For instance, music. Amy plays the violin (though she hasn't touched it since her mother died) and Farouz plays the oud, which is also a stringed instrument, one he is so fond of that it's the first thing he bought with his earnings as a pirate. They talk a lot about their lives, and the stories Farouz tells about his life in Somalia are some of my favorite parts of the story.

Amy's narrative voice moves smoothly between her backstory and the current story. She has a lot of family tension surrounding her mother's suicide, her own abandonment of her education, her stepmother (who she refers to as "the stepmother"), and her absentee father. It's a well-crafted backdrop for the crazy hostage situation and informs many of the choices they make during it.

When I realized Amy was going to have an attraction to one of the captors, I just didn't know how this would be pulled off convincingly, but these characters were all so well-formed and genuine that it worked, and very well. The six hostages and three primary pirates were all distinct with different personalities, even the secondary characters like Felipe the cook. It wasn't like a bunch of characters on a boat, it was a bunch of people on a boat. Their interactions all seemed to happen very naturally.

I was drawn in by the premise of the book, and the fact that I had read this author before actually made me wary, because how could it possibly live up to In Darkness? It's a very different book, to be sure, but maybe just as good. Now that I've read it I'm very surprised I haven't heard anything about it. I literally stumbled across it one day at the library while looking for In Darkness to put on my Staff Picks shelf. I'm so glad I did - tell everyone you know who likes YA books that they should read this! It merits way more attention than it seems to have gotten.
Posted by 3goodrats at 7:59 AM