The Port Chicago 50: Disaster, Mutiny, and the Fight for Civil Rights by Steve Sheinkin (2014) 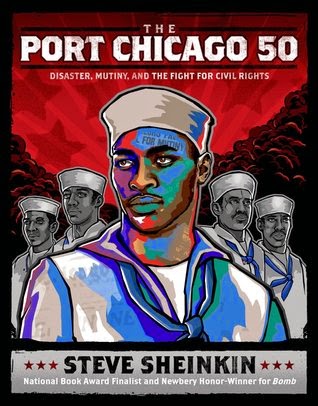 In 1944 a huge explosion rocked the Port Chicago naval base in California, killing over 300 sailors and injuring many more. Afterward, close to 250 men refused to go back to work loading ammunition because they felt it was unsafe. They also noted how unfair it was that only black men were doing this dangerous job. Some were coaxed back to work, but 50 men held their ground and were charged with mutiny. Facing possible execution, these men went to trial to try and defend themselves, but despite their best efforts (and the advocacy of Thurgood Marshall) they were found guilty. However, the case prompted the Navy to review and change their segregationist policies.

Many of these guys were little more than teenagers, and far from being organized rabble-rousers were just scared of being blown up on the job. It seemed like the outcome was  obviously a huge miscarriage of justice. Their concerns weren't taken seriously and they were convicted on pretty flimsy evidence. It seems like everything in the trial was basically ignored in favor of a predetermined outcome.

The worst part is that in many ways, things haven't changed that much. As many of us are aware, the justice system isn't exactly friendly towards non-whites and it's frustrating to know just how long these situations have been happening with little headway towards real equality. I'm glad books like this are being written to remind us how many times this sort of thing has happened. I hadn't even heard about this particular episode in history, which just goes to show you how many stories about racial injustice there are.

This novel is written for teens, and I read it for my Not-So-Young Adult book group at work. It was nominated for a National Book Award, and I can see why. Although I wouldn't exactly call it enjoyable, I found it clear and informative and it held my interest throughout. Recommend if you're interested in learning more about the history of civil rights.
Posted by 3goodrats at 9:30 AM