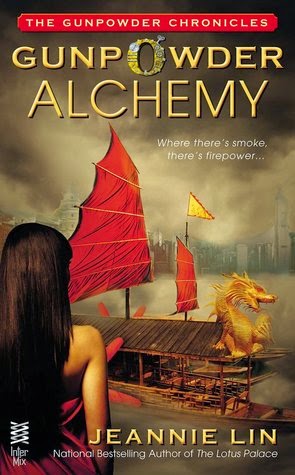 When Jin Soling was just a child, her father was executed for admitting that the British steam engines were superior to Chinese gunpowder engines. Years later, Soling and her family are selling off valuables just to feed themselves. On a trip to a nearby market where Soling hopes to sell a Japanese puzzle box left by her father, she is turned down over and over and finally arrested by the authorities. She is then sent on a mission that turns into a pretty big adventure involving kidnapping, pirates, and the opium trade. Along the way she also meets a man who was very significant in her past.

This Chinese steampunk meets historical romance is very intriguing. I very much enjoyed the world-building and all the historical elements. Opium was a huge theme in the novel because of what was happening with the trade, but also because Soling's mother was an addict. I think all of the characters were affected in some way by opium. One character had bound feet and Soling was helping design special mechanical shoes so she could walk, which was a very unusual element that I really enjoyed. The steampunk bits were also very cool - all the mechanical limbs and automatic sedan chairs that you can program with an abacus-like contraption, airships, not to mention the whole steam power vs. gunpowder power aspect. I really found that all very fun to read, and it added a lot to what was a pretty enjoyable adventure novel. This is also the second book in a row I've read that takes place (at least partially) on a boat that gets attacked by pirates.

However, it's not billed as adventure, but romance, and looking at it that way, it lacks a lot. For one thing, there was very little romance in the book at all. Also, Soling had that stupid neurosis that so often appears in romance to create a block between the characters, but which is obviously totally fabricated. There were times that she was all "Woe is me, we cannot be together" and I wanted to grab her by the shoulders and say "Did you not hear what he said? He explained that already. That is no longer an obstacle to your love." She remained convinced that she still suffered from her family's disgrace after her father's execution, even after that disgrace became irrelevant because of changes in how people viewed him.

This is sort of a mild spoiler, but I felt really weird about the ending. At the conclusion the romance was almost resolved. Like, not quite resolved but extremely close to it. I expected it to end with the characters totally together and happy ever after, etc, because that's how romance novels work. Even in a series, each book is a romance between a different set of characters. If this relationship is going to be drawn out for the whole series, I don't understand why it would be so close to wrapped up at the end. Maybe something happens in the next book that draws the characters back away from each other, but if that's the case this romance is a very slow burn and I'm not sure I have that kind of patience.

Ultimately, I feel very conflicted about this novel. Soling's character could use a little more development and I'm not very drawn in by the romance aspects. On the other hand, I liked the adventure and really did enjoy the time I spent reading it. It's really a great premise for a series. I'm kind of curious about where it will go, but it remains to be seen if my interest holds long enough for the next book in the series.
Posted by 3goodrats at 9:51 PM