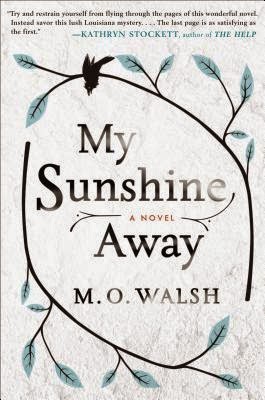 In 1989, Lindy Simpson was raped and everything in her idyllic neighborhood changed. It was the sort of place where everyone knows each other and kids ride their bikes all over the place and wander freely with minimal supervision. But after the attack, suspicions mount and uncertainty reigns. Our narrator is a teenage boy, slightly younger than Lindy, who has admired her from afar. Some might call him obsessed. He is also one of the suspects.

Our narrator tells the story from later in life, ruminating on his memories of that time. Just a few pages from the end, I suddenly realized I had no idea what his name was. Did I miss it? Did I forget? How I got almost entirely through the book without realizing the author had never revealed this basic piece of information is a testament to how seamlessly this story is woven, and how cunningly it folds you into its dark embrace.

I read it in about a 24 hour period. I was drawn in very early, with the descriptions of the narrator and his friends and family just hanging out in their yards in the summer. I've never even been to Louisiana, but the way he described the neighborhood kids hanging out in the yards, using bark and moss as playthings, with pitchers of Kool-aid sitting on the porch, evoked very strong images from my own rural childhood. The narrative was also infused with events from that time, like the Challenger explosion and the arrest of Jeffrey Dahmer, making it feel that much more immediate.

Contributing to the mystery of who raped Lindy is a very full cast of abrasive and sinister characters, each of whom we get to know only enough to raise a lot of questions. The exception of course is our narrator, who we know much more intimately (but still question). As a teenager who is just figuring things out, he hasn't quite learned boundaries yet, and some reviewers on Goodreads found him downright creepy. I didn't. I thought he was just obsessed in the way many teenagers are obsessed with each other as they first experience sexual attraction. Suspicions about his guilt were raised based on some things he did that maybe crossed lines, but in another context wouldn't have appeared so incriminating. Throughout the novel I preferred to believe he was just misunderstood, but I remained anxious about his guilt or innocence up until the end. Reading this was a pretty tense day for me.

I was fortunate enough to be able to participate in an online chat with the author. He talked a little about how our actions are interpreted:

"I think that there is a very fine line between being considered romantic and being considered creepy or a "stalker". You buy a girl flowers and you're romantic. You buy flowers one too many times and you're a stalker. This type of thing can crush you. The boy wants only for the girl to know of his affection. How people react to his actions can change the course of how people see him and, eventually, how he may see himself...I just think that everything is out of proportion during adolescence since teenagers have no frame of reference. Every love is the biggest, first love. Every rejection feels like the final one. So, negotiating those things is hard enough, but when you feel like the way people interpret your actions will define you forever, that makes it even harder."

This dark coming-of-age novel is a very strong debut from an author I'm sure we'll see much more of. The startling end of childhood experienced by these characters in such an evocative and atmospheric setting really got under my skin. Highly recommended.

My Sunshine Away will be published in February 2015. I received my copy courtesy of Penguin First Flights. I was not compensated for this review.
Posted by 3goodrats at 2:38 PM