10% Happier: How I Tamed the Voice in My Head, Reduced Stress Without Losing My Edge, and Found Self-Help That Actually Works by Dan Harris (2014) 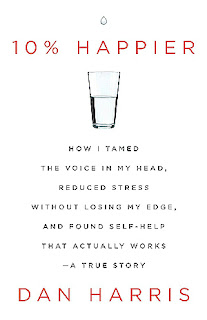 Dan Harris coanchors Nightline and the weekend edition of Good Morning America and several years ago he had a panic attack on live television. In an attempt to get control over his stress, the agnostic, skeptical Harris delved into the world of meditation. Sifting through books that approached meditation from a decidedly spiritual viewpoint, interviewing people with pseudo-scientific views, and even attending a 10-day retreat, Harris finally came up with a version of mindfulness that works for him. 10% Happier is both a memoir and a self-help book.

I was totally unfamiliar with Dan Harris, despite the fact that he's a news anchor and I went to college with him (he graduated 2 years before me, and I have no idea whether or not we ever met.) But this book has been everywhere and keeps catching my eye because who doesn't want to be 10% happier? Then I attended the MLA conference a few weeks ago and went to a panel about mindfulness that mentioned this book. Sold!

In the opening pages Harris says, "Meditation suffers from a towering PR problem, largely because its most prominent proponents talk as if they have a perpetual pan flute accompaniment." He goes on to interview such prominent figures as Eckhart Tolle and the Dalai Lama in his quest, and I was happy to see that he basically picked and chose what worked for him and ignored what didn't. This is tremendously validating for those of us who want to reap the (many!) benefits of meditation but can't buy into all the touchy-feely spiritual journey type of talk. The best part about this book was how he brings this arguably life-changing practice into his regular life. He didn't quit his job or move to an ashram or anything like that - he stayed the guy he is, with the same job and same wife, but handles everything a bit better.

I really liked the story of how he tried to get himself back on track, especially the ten-day meditation retreat he forced himself through. Being a news anchor assigned to stories on religion was a great way for him to learn more about the spiritual aspect of meditating while also providing fodder for his show. His interviews and conversations with people like Mark Epstein and the Dalai Lama provided additional perspectives and were fascinating in themselves. The book title came from his struggle to explain his new habit to people without them assuming he had gone a bit kooky. When asked why he meditates, he started answering "Because it makes me 10% happier." Nobody is going to argue with that.

I had already begun meditating a couple of weeks before reading this book, just using the simple instructions I learned at the library conference. So it was great to get Harris's advice and perspective, as well as suggestions for further reading. I'm hoping to learn more by reading some of the books he recommends.
Posted by 3goodrats at 7:30 AM