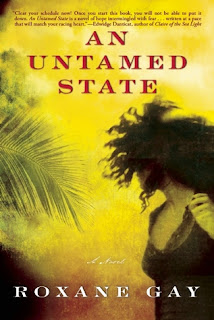 While Mireille is visiting her parents in Haiti, along with her husband a baby, a planned trip to the beach turns into a nightmare. Armed men stop their car outside of her parents' gated property and take Mireille away, asking her father for a huge ransom. As she predicts, he refuses to do business with thugs, and Mireille is imprisoned for thirteen excruciating days.

This novel is divided into two parts. The first, longer part ends when Mireille's captivity ends, and the second part is about the aftermath. Unsurprisingly, she is badly hurt and changed by the experience, which causes rifts with her loved ones who don't know how to help her. It all felt brutally honest and wasn't easy to read. She was horribly repeatedly assaulted by the men who kidnapped her and you really get the full impact of it, though thankfully most of it wasn't described in great detail. It was more about her experience of the events than the events themselves. Those experience inform the second part of the book when she is freed and returns to the US with her husband and child. But they remain distant, and it is not easy to bridge that gap.

Mireille's relationship with her husband Michael was one of my favorite things about this story. They were very happy together before the kidnapping, despite their very different backgrounds, but even a relationship as strong as theirs can't recover easily from something like this. Mireille couldn't ask for what she needed, or express her love for her family, and Michael didn't know how to help and became impatient. It all felt very real, and explored an aspect of marriage not generally touched upon in novels that I've read.

In many ways, this book was different from anything I've read. I think I've only ever read one book that took place in Haiti, for one thing, and it was a completely different story. But the subject matter as well - the daughter of a wealthy Haitian being kidnapped for ransom - is pretty unique. Gay has a style all her own as well, and her strong feminist slant was recognizable from her book of essays I had previously read.

Honestly, I can't think of one criticism of this book. I didn't want to put it down, even though the subject matter made it difficult to read at times. But I became so invested in Mireille's safety and recovery, there was no turning away. If you've been thinking of reading this, don't put it off like I did. I have no idea why this book hasn't gotten more attention, but I'll certainly be recommending it.

An Untamed State is my ninth book (out of ten!) for my TBR Pile Challenge, and I'm reading the final book now. I'm shocked that I'll finish this challenge halfway through the year, but of course I have plenty of other books I want to read so I don't anticipate my reading slowing down at all.
Posted by 3goodrats at 7:30 AM