It has been a loooong time since I've posted anything about knitting. It's actually been quite a long time since I've really done any knitting, but then I started watching tv again. I picked up my East Neuk Hoodie while watching season 1 of The Returned, though it was a bit tricky since that show is subtitled. But once I moved to the new season of Orange is the New Black, things have really got moving. I've even taken it on the bus a few times, though it's getting unwieldy.

Have I told you about the East Neuk Hoodie? I don't think I have. I mentioned it briefly at the end of my last knitting post, which was way back in February. It's from the Fall 2014 issue of Knitscene, which had a whole section on modern ganseys. I love a gansey, and the one of the cover kind of stole my heart. It's a hoodie with a front pocket, and I've just finished the pocket. 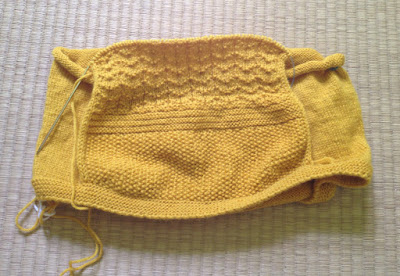 The one in the issue was made in purple, and you know I love purple, but I was determined to make this in mustard yellow from the first moment that I saw it. Finding just the right shade was not easy (especially since my go-to yarn store closed down a couple of years ago) but I went to the one remaining yarn store in my area and looked at all the yellows until I found just the right shade. Of course they didn't have enough of it for my sweater. So one of the employees tried to talk me into a lesser mustard yellow until I finally asked if they could just order me some more of this one. They did, and it was a good choice.

Knitting sweaters seems very unpleasant for summer, but I have air conditioning and I really want to be able to wear this in the fall. Here's hoping I can keep up the pace! Once I finish OITNB I might need a new show to watch in order to keep up the knitting so please give me your recommendations!