My Brother Sam is Dead 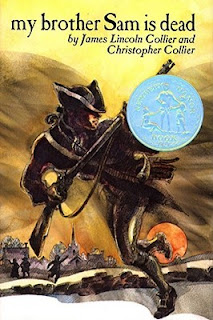 Tim Meeker's older brother Sam runs away to join the Continental Army and fight against the British. His father is a Tory, loyal to the King, and is very upset about this. Tim doesn't know what to think - on the one hand, he admires his older brother but on the other hand he respects his father. Who should he believe? After Sam leaves, he doesn't have much time to think about it because he has to help around the tavern and take care of the livestock, doing Sam's share of the work as well as his own. But as the Revolutionary war comes closer and closer, it becomes impossible for Tim and and the rest of his family to stay out of it.

Since this is a classic, and the title tells you as much, it's not a spoiler to say that Sam dies. What's interesting though is that the way he dies isn't heroic. Plenty of soldiers died on the battlegrounds, but plenty also died of illness or were executed for crimes. We see several such deaths in this book, which definitely doesn't glamorize or romanticize war. In fact, there's an interview with Christopher Collier at the end of my edition in which he says that any book that is honest about war is anti-war because any book that glorifies war isn't telling the truth. (This interview was in 2005 and he also says that he wishes George Bush had read this book.)

Today we think of the Revolutionary War as something that was necessary, and it's a given that we should have separated from England and become our own independent country. But it wasn't clear at the time and not everyone in the American colonies agreed. The Revolutionary War was complicated and nuanced, like every war, and the authors did a great job of representing the issues. Another thing we might forget is how young people were who fought in the war. I think Sam was only 16 when he joined up.

At home, 12-year-old Tim took on a lot of responsibility. I actually thought he was older because I always forget that back then childhood didn't last as long as it does now. (In fact, many young people apparently now think that adulthood doesn't start until they're 30. Gawd help us.) Although people were responsible younger than they are now, the sphere of daily life was much smaller. Tim had never been to a colony outside of Connecticut until he goes on a trip with his father to sell oxen, and they stay with cousins he had never met before, though they're not far away by today's standards. This sort of thing fascinates me!

I hadn't read this book since fifth grade when my teacher, Mr. Furth, read it out loud to the class. It's the only thing I still remember from fifth grade, aside from the contra dancing. We're reading it for the Not-So-Young Adult Book Group at my library, because sometimes we like to mix it up and read classics. I didn't remember much about the book but was afraid I wouldn't like it. It was better than I expected and a quick read. It wasn't a total page-turner with characters that I could relate to - like contemporary teen books - but it was a very quick read that left me with a lot to think about.