The Spirit Catches You and You Fall Down

The Spirit Catches You and You Fall Down: A Hmong Child, Her American Doctors, and the Collision of Two Cultures by Anne Fadiman (1997) 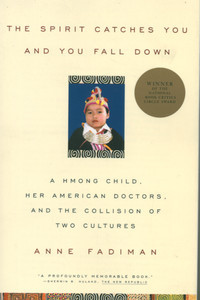 In the 80s, a family of Hmong refugees living in Merced, CA had a baby who began having seizures when she was very young. Their doctors prescribed medications for Lia, but they did not understand the instructions or didn't trust the medication and failed to dose her properly. Her seizures worsened, and the relationship between the family and the medical establishment continued to be complicated. The result was ultimately tragic when Lia eventually had a seizure so bad that it left her in a vegetative state. Whose fault was it? Could it have been prevented? Anne Fadiman spent many hours interviewing the Lee family, Lia's doctors, social workers, and others involved with the case. She also interviewed people from the Hmong community about their culture and history in hopes of better understanding all aspects of this situation.

The Lees treated their daughter with traditional methods and rituals, believing that illness was related to the soul. In Lia's case, they thought her soul had left and they thought the medications prescribed by the American doctors did more harm than good. It was difficult for them to understand the treatment not only because of the language barrier, but also because of the huge cultural rift. For instance, the Hmong people don't tell time the same way we do and being told to give Lia medication at certain times of day was not an instruction they could make sense of, and since they couldn't read or write in any language, writing down these instructions wasn't helpful.

The doctors were very frustrated with the Lee family. They knew that Lia's condition would worsen if her parents didn't give her medications properly. They tried different ways of communicating the instructions to help them remember, but nothing seemed to work. Sometimes the Lees would just decide to change the dosage and supplement with their own mysterious treatments

It was clear that everyone involved cared about Lia. It's true that the doctors didn't really ask the family for their perspective on her illness or treatments to better gauge their understanding. And it's true that the Lees didn't comply with instructions. But the doctors wanted what was best for her, and the parents obviously did too. They adored this kid - this was a couple who had around a dozen kids, and it was clear that Lia was their favorite. They weren't deliberately sabotaging her health. Fadiman does an excellent job of presenting the story in such a way that gives credit to both sides, acknowledging that everyone made mistakes, but everyone also tried to do what was best in their own way.

Perhaps nobody should be blamed for the outcome, but that doesn't mean it wasn't preventable. Many discussions took place about better ways for the Hmong and Americans to communicate and to work together, which continued to be important in a community in which 1 in 5 people were Hmong. American doctors assume they will be respected and listened to because of their positions, but the Hmong don't have a cultural context for medical doctors and so don't automatically assume they know what they're talking about. Lia's prescribed medication regimen and its frequent adjustments would be confusing even to a literate American. The Lees weren't stupid, careless people - they were simply from a culture without complicated bureaucracies, and the life skills in which they excelled in their village in Laos weren't transferrable to the United States.

Although the books contains important lessons about cross-cultural communication, I would argue that many of those lessons would apply in any situation. For instance, some recommendations to improve health care for Hmongs were "minimize blood-drawing" and "allow relatives or friends in the hospital room around the clock." Having spent some time in hospitals when my mother was sick, I am baffled by some of the rules and the constant checking of vitals and drawing of blood, which interfere with such basic functions as eating and sleeping. How can anyone get better under such circumstances? Thinking about this time also made me sympathetic for the Lees when I remember how confusing it was to listen to the doctors, and to try to keep straight everything they said. My family would talk a little later in the day, and would all remember different things about the conversation and try to piece it all together. And we are Americans and English is our first language. We had no need for shamanic rituals or animal sacrifices, but apparently they make the Hmong more comfortable with accepting medical treatments they need, so why not?

Fadiman provides a lot of background information on the Hmong people and their history, but it could have been more concise. Parts of the book were a bit of a slog. Still, it was a fascinating story and it left with me a lot to think about.
Posted by 3goodrats at 7:30 AM

Labels: anne fadiman, books, nonfiction, reviews, spirit catches you and you fall down