Pit Bull: The Battle Over an American Icon by Bronwen Dickey (2016) 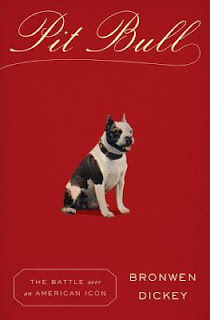 As its title suggests, this brand new book is all about the pit bull, the history of the breed, and its changing place in American society. Dickey presents a thorough overview, compiled from extensive research and interviews with veterinarians, dog trainers, rescue staff, and activists both for and against breed-specific legislation regarding these recently-controversial dogs.

What even is a pit bull? There are four different breeds that are considered pit bulls: the American pit bull terrier, American Staffordshire terrier, Staffordshire bull terrier, and American bully. Some of these breeds are recognized by professional kennel clubs and others are not. More importantly, dogs are frequently misidentified. In one study, shelter staff misidentified dog breeds 87.5% of the time. This is because such a small part of a dog's genes determine how they look and most dogs are mixed. So even if a dog looks like a pit bull, it might be mostly something else. Conversely, an actual pit bull might look more like another type of dog. This is important because breed is usually determined not through a genetic test, but just by looking. And if your dog looks like a pit bull, you can be screwed out of rental housing or homeowner's insurance. Or maybe your neighbors will assume that you're a drug dealer and not invite you to their barbecues.

When many of us think of pit bulls, we think of aggression, biting, or even dogfighting, which is what they were originally bred for. Pit bulls are notorious for biting people, eating babies, and all sorts of violent mayhem. Dickey tries to get to the bottom of actual data about pit bull bites, but there just aren't real statistics out there about dog bites. If someone goes to the ER for a dog bite, they are asked about the breed of dog; this field is often left blank, but if it's filled in, it's done so by the victim or a family member. In other words, the breed of dog is being identified by a bystander rather than a canine professional. Then if the dog responsible is described as a pit bull it is usually all over the news; if it's some other breed, it is barely reported at all. Just to keep things in perspective, only about 35 people are year are killed by dogs, which is nothing compared to all the other ways in which we die.

Dickey also goes into the part that race has played in the image of the pit bull (the dogs were common in early hip-hop culture) and the huge number of pit bulls left to drown during hurricane Katrina - along with their African-American owners - because people couldn't take their pets with them, and many of the rescues wouldn't take pit bulls. Some people, including the president of PETA, have dismissed pit bulls as being only owned by pimps and thugs, insulting pit bulls right along with their owners.

There is just so much in this book that is interesting! Of course, dogs' behavior is largely determined by how they are raised, and some of the experts in the book point out that dogs aren't really allowed to act like dogs anymore. They are expected to take all sorts of treatment from people and not react at all, which maybe is expecting a bit too much. Some of the most publicized deaths from dogs (pit bulls and other breeds) happened when children were left alone with dogs. Kids behave erratically and have a tendency to tease and provoke, and animals can be startled by their behavior. The good news is that most dog bites are completely preventable by, say, not leaving toddlers alone with dogs. In all the furor and breed-specific legislation, something important has gotten lost, which is that for all the dogs you hear about that maim and kill, there are thousands who do not. There are a ton of pets dogs in the United States, and not very many serious bites.

I think the question at the heard of this book is: are pit bulls different from other dogs, or are they the same? Given the information about how wrong we are about breeds, and how mixed most dogs are, I'd have to come down on the side of dogs just being dogs and they're all basically the same. Which is what some of the experts interviewed in the book think. But others disagree, such as breeder and trainer Diane Jessup, who is a firm advocate of pit bulls and quipped, "I refuse to face an uncertain future with a fucking Labradoodle."

The last thing I want to mention are a couple of important organizations featured in the book. The Coalition to Unchain Dogs works to subvert the usual way animal welfare is handled. Rather than removing dogs from homes where they aren't getting the best care, they work with the families to improve their dogs' living situations. They help to provide spay/neuter surgeries, veterinary care, and dog houses. They also built fences so families didn't need to keep their dogs chained up in the back yard. Pets for Life, which was started by the Humane Society of the United States, is devoted to providing resources for pets in underserved areas where they don't have access to pet supplies or veterinary care. They do a ton of outreach and many of their clients own pit bulls.

As you can tell from this extensive post, I found this book fascinating and learned a lot! Although I've always been an animal lover, I've never known much about dogs. But I've learned a lot in the past year since adopting a pit bull mix at from a local shelter. (At least they said she's a pit bull mix - who knows?) Although this dog has been a nightmare at times and has cost us lots of dollars in training, I've never attributed her poor behavior to her breed, but rather to the neglect and mistreatment she surely endured for the first year of her life. So I guess this book just reinforces what I already thought, but it's nice to be validated with actual data and information from experts. Bronwen Dickey has revealed a great deal about not only dogs, but American culture. Anyone interested in animals is sure to find something of interest here.
Posted by 3goodrats at 7:39 AM