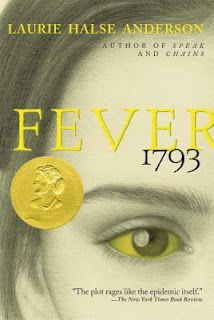 It's August of 1793 in Philadelphia and Matilda is a pretty typical teenage girl. She helps out at her family's coffeehouse, which she has ambitious plans for, and daydreams about a boy her mother doesn't approve of. But rumors are swirling about a deadly fever, and one day their serving girl Polly doesn't show up. She was fine the day before, but took sick in the evening and was dead within hours. Mattie's family tries to go on with business as usual, but soon their world is turned upside-down.

I read this book in one sitting. This is incredibly unusual for me, but I did it twice in the course of a week (the other time was Elie Wiesel's Night.) In this case, it was not only a quick read, but I couldn't put it down. This is actually my second reading of this book, but the first time was so many years ago all I remember is that I liked it.

I always forget just how much I like historical fiction until I'm actually reading it, and historical teen fiction is even better. I love that Mattie is such a typical teenager, even though she lives in a time that is very different than today. She gets really frustrated at her mother, has all sorts of ambitions that her family doesn't support, and of course has a serious flirtation with a boy her mother doesn't approve of. Mattie's father is dead, but her grandfather lives with them and is very important to her. I loved their relationship and the way they stuck together when times got really rough.

I do love a good plague novel. (See also: Year of Wonders by Geraldine Brooks). I even once read a nonfiction book about the flu of 1918. I think it goes along with my love of post-apocalyptic and dystopian novels. I like reading about how people survive when shit really goes wrong. Even more so in a presidential election year; I like to keep things in perspective.

This book was chosen for my Not-So-Young Adult book group. A couple of years ago we read another, very different, book by Laurie Halse Anderson called Wintergirls, a contemporary story about eating disorders. She is also the author of the well-known novel Speak, also contemporary. I've really liked everything of hers that I've read, but this one in particular is the right kind of catnip for me!
Posted by 3goodrats at 7:30 AM