After I Do by Taylor Jenkins Reid (2014), narrated by Tara Sands 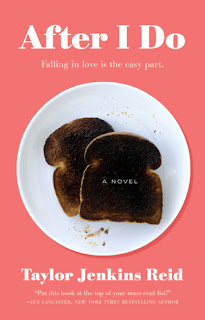 Lauren and Ryan have been together since college, around eleven years when the story opens. Their rock-solid relationship has crumbled and they have come to resent one another. So they resort to desperate measures. They decide to be apart for one year. No seeing each other, no talking on the phone, no emailing, nothing. They don't know what will happen at the end of this period, but they both hope this break will give them a chance to figure out what they actually want.

Lauren stays at the house with the dog, and Ryan moves to an apartment. It's rough, but Lauren has her best friend and her sister to support her. I loved Lauren's sister Rachel, who is an expert baker, and I like that they have such a close relationship. Including strong female friendships is so important to making characters real, and it's sadly left out of some books that focus so much on the primary romantic relationship that you'd think there's nothing else in the protagonist's life at all. Here, Lauren was given a chance to grow as a character and get to know herself better, while also having more energy for other relationships. Storywise, this also meant I had no idea whether or not she and Ryan would get back together in the end or not, and I liked that uncertainty a lot.

An unexpected consequence of the couple's separation was how it affected Lauren's family, especially her brother Charlie who has always looked up to Ryan. Her family has some pretty major events happen during this separation, and it was strange to not have Ryan there. Even just explaining what they were going through was difficult, especially to her grandmother, a lively lady who describes things she doesn't like as "farcical" and is convinced she has cancer and brings the subject up regularly, but is suspiciously vague on the details. Come to think of it, Lauren's entire family was a whole lot of fun to read about and I'm very glad they were all such well-developed characters.

One of the things I loved most about this book is the way it portrays different ways of having relationships. Not just in terms of the people involved - though there was a relationship between two women and another involving older people embarking on a new romance - but in a more philosophical way. Lauren was in the same relationship for years and valued the stability over passionate romance. Her mother only wanted the romance, and would end relationships when that wore off. Her sister was happily single and felt like her life didn't need to revolve around her relationship with romantic partners at all. Reid didn't present any of these as the right or wrong way, just laid them out as different ways people in this story viewed relationships. It was pretty cool.

My only tiny little criticism is not really a criticism, but more of a question. Without saying too much about it....is it normal for people to have their spouse's email password? I know there are couples who share an email or Facebook account (which I also don't get) but do people share passwords when they have individual accounts? That seems so very weird to me, and I may have gotten a little too preoccupied with this minor point.

All in all, I really enjoyed the book a lot! This is my second Taylor Jenkins Reid book, after One True Loves, and I really dig the unusual way she has of writing novels about relationships. They all seem to have such interesting little twists to them. I listened to this one on audio also, and although it was a different narrator, she was just as good. I feel like I may try to plow through Taylor Jenkins Reid's books in a way I haven't done with any author in a while, so I'm glad she still has two others. It looks like she has another coming out in June, and it sounds quite different from her other books, but I'm very intrigued! If you like books about relationships with a fairly light writing style but that still make you think, I recommend checking this author out.
Posted by 3goodrats at 4:08 PM

I'm so glad you liked this! I finally read "Maybe in Another Life" this year and added all of Taylor Jenkins Reid's other books to my to-read list. I didn't even know what this one was about, but it sounds wonderful and so intriguing!

My husband and I mostly have joint stuff but as for the rest we do know each other's passwords. :)

Ok, then maybe it's a realistic plot point :) We sometimes discuss that we should store passwords somewhere that the other one can access in case of emergency/death, but so far haven't acted on it. Maybe we are just unusually private people.