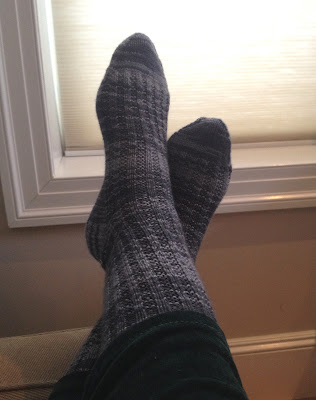 I haven't been knitting much lately, as evidenced by these socks I began eleven months ago. Partly that's because of the dog, who enjoys grabbing at my projects as I'm knitting and will only settle for, at the very least, closely inspecting it. It's hard to work under those circumstances. The other extenuating factor is that in the last few months I've had a lot of wrist pain and gave up on both knitting and yoga. But I've started knitting again because I want to take advantage of the fact that the dog is away at boarding while we have renovations being done on our house. It's going ok and I don't think it's bothering my wrists. I think yoga was the real culprit. (Those instructors really love having you remain in some variation of downward-facing dog for half the class, and I don't know why. Plenty of other poses to choose from.)

Anyhow, I have a new pair of socks. The days have been very gray so I wasn't able to get a very well lit photo. But they feel quite nice, which is what's important. I used some Regia yarn I had hanging around and the Garter Rib pattern from Sensational Knitted Socks.

Now I'm hoping to focus on my East Neuk Hoodie which has also been in progress for many months.
Posted by 3goodrats at 9:00 AM

Love the socks! I've only ever knit one pair of socks and they didn't fit quite right so I never got around to trying another pair. But this year I'm going to! I'm planning to get some of that fun self-striping yarn. There are so many options out there, I don't know how I'll choose.

I got lucky with our pets -- Conan never cared about my knitting, other than maybe wanting to rest his head on a soft skein of yarn for a nap, and Lily the cat only shows interest when I'm winding a skein into a ball. But I'm sure I'll have to keep my projects out of reach of the puppy for a while! (I'm having flashbacks to the time a dog we were sitting decided to chew up a circular needle and part of the hat that was on it!)