The Sleepwalker by Chris Bohjalian (2017) 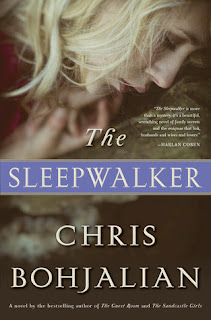 Annalee Ahlberg sleepwalks. One night she was found spray-painting the hydrangea in front of the house. Another time her daughter found her on the precipice of the Gale River bridge. One day, however, she just disappears. Twenty-one-year-old Lianna notifies the police and her father, who is out of town for work. She tries to reassure her young sister Paige, but they both know about the dangers of their mother's night-time wandering.

Lianna is drawn to a detective on the case, both attracted to him and convinced he knows more than he is saying. She stays home from college to take care of her father and sister, and continues trying to learn more about her mother's life and discover what could have happened to her that night.

What Annalee suffered from went beyond the sort of sleepwalking that I remember from my childhood. I would sometimes wake up in some part of my house and not remember how I got there. But Annalee would leave the house, her compulsions driving her to seek something she couldn't get, at least not when he her husband was gone. It was eerie, and a little scary in the way that any loss-of-control is scary. There's much more to Annalee than what her daughters know, of course, and experiencing the uncovering of secrets along with Lianna felt illicit and suspenseful. And sad too, because after all she has lost her mother.

We know there's a lot we don't know, and throughout the story I kept formulating my own theories about what might have happened. There are a couple of threads that turned out to be red herrings, but I enjoyed speculating about them and, in one case, I was very relieved that what I feared wasn't true.

The story takes place in a small town, of course, with the requisite gossip and rumors and I liked how that all played into the story of Annalee's disappearance. I also liked the way Lianna's relationship with the detective, Gavin, developed and what she learned from him. It wasn't a thriller by any means, but it was a mystery that, despite the sadness, was a pleasure to unravel.

Since I've read almost all of Chris Bohjalian's books, I'm trying to decide how this one compares. I don't think it will stick with me the way The Guest Room did, but it's just a very different kind of book, slower paced and with fewer surprises. I think the one it reminds me of most might be Secrets of Eden. If you like Chris Bohjalian, you won't want to miss it.
Posted by 3goodrats at 7:30 AM