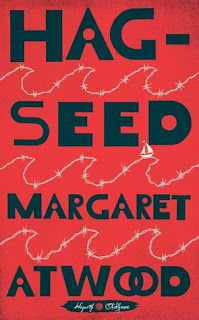 The director of the Makeshiweg Theatre Festival has been delegating more and more to his assistant until his position is pulled out from under him entirely and his production of The Tempest cancelled. Lost and adrift, Felix flees to a small hovel where he lives alone, accompanied only by the memories of his dead daughter. Eventually he takes a job producing plays at a local prison and it is here that he finally has the opportunity to stage The Tempest. It is years since he was ousted, but he has been planning his revenge ever since, and it's through this play that he'll finally have it.

I read The Tempest pretty recently and then attended a performance, so it was pretty fresh in my mind as I began this retelling. This novel is about a man producing The Tempest, sure, but it's also the story itself. It's like two Tempests in one. And it works, brilliantly.

Just as Prospero was exiled with his daughter after being usurped by Antonio (or is it Alonso? I always confuse the two), Felix goes off by himself after losing his job and his memories of his daughter Miranda (of course) become so strong it's as though he imagines she's actually with him. He knows she's not really there, but he still talks to her and pretends she's real. He's been working at the prison for a while now, spending a few months of every year organizing inmates to perform a Shakespeare play. Circumstances come about that bring a group, including his former assistant Tony, to the prison to see the production and Felix knows this is his opportunity to exact revenge.

One of the things I loved is that the prisoners aren't allowed to swear, except for Shakespearean swear words from the play. So before they even start rehearsals they go through the text and compile a list of swear words. Then characters such as Leggs and 8Handz and VaMoose can be heard saying such things as "Right on, dude. Beetles light on them! Blister them all o'er!" and "Moon-calfs won't know what hit them!" and "Shove it, freckled whelp."

If you're not familiar with the original, there's a summary at the end which should help. It's definitely better if you can see how this story mirrors the original, but it could be enjoyed on its own especially since you get the whole story through reading about the performance staged by the characters. I found it a pretty quick read, clever and thorough enjoyable.
Posted by 3goodrats at 7:30 AM