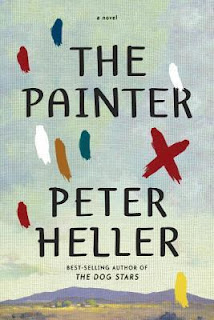 Jim Stegner's life has been filled with pain and turmoil. He once shot a man in a bar. He lost his only child. His relationships have fallen apart. But he's been limping along, and he's a successful artist despite the past he can't quite recover from. One day he sees two men mistreating a horse and something snaps, and he is once again on a destructive downward trajectory.

Jim's violent impulses are at odds with his reclusive nature. He wants to continue just painting and fly-fishing, but suddenly the law is on his back, as are some angry men looking for retribution. This novel is filled with interesting moral questions to ponder, and a revolves around an intense character study of a complicated man who is basically a good decent person but has on occasion done very bad things.

I've read few books that take place in the Southwest, and it's an area that I'm not especially drawn to, but Heller brought it alive beautifully and vividly. His descriptions of fishing and nature were breathtaking. Here's a paragraph that I loved:

"I walked up the hill. The long grass brushed my legs. The elk had spread out, and once in a while one of the calves lifted its head and cried. It cracked me in two. It was a birdlike cry, something between a chirp and the keen of a hawk. And one of the moms answered, tilting up her chin, louder, hollower, more resonant, a call that must have carried miles down the valley. They were close enough to see each other clearly, I was sure. They were conversing, a kind of call and response, an affirmation that rang against the hill."

Indeed it's the beautiful language that makes this book truly stand out. I had forgotten that Heller's style was such an integral part of The Dog Stars. I'm only sorry that it's taken me so long to read The Painter, and I only made it a priority recently because a coworker who read it urged me to read it too. I think The Dog Stars remains my favorite because of my deep love for dystopias, but this book is just as good.
Posted by 3goodrats at 7:50 AM

I'm so glad you liked it as much as The Dog Stars. I hope Heller writes another book soon!