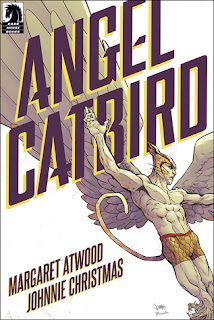 A genetic engineer has an accident that results in becoming part owl and part cat, with an ability to transform between his human self and catbird self. He then meets other half-cats and a villain who is (of course) half rat because rats are always evil. Everyone is very scantily clad.

I honestly have very little to say about this book. It was ok. There wasn't a lot to the story, the art was fine but not really my style, I found the dialogue a bit forced and awkward, and I didn't recognize Margaret Atwood in any of it. Atwood says in the introduction that she grew up on comic books and that this doesn't feel like the surprising departure to her that others may view it as. To me, it feels like maybe she's trying to write the kind of comic she enjoyed in her youth rather than writing something in her own style but in graphic form, if that makes sense. It's honestly not terribly creative, though it's also just the first volume in a series so perhaps there will be more to the story later on. I won't be following it though.

I didn't actively dislike it, it just didn't do anything for me. As far as Atwood is concerned, I'm going to stick with her novels.
Posted by 3goodrats at 7:30 AM