May wrap-up and plans for June 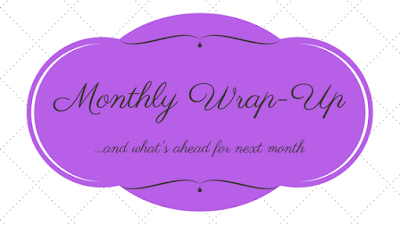 I really like when other bloggers do a monthly wrap-up, and now that I use a bullet journal I tend to assess my life on a monthly basis so it seemed like a good time to give this a try! It makes me feel more organized and this also creates an opportunity to share a little about my non-reading life. Not that my life is super interesting but I do really enjoy getting to know other bloggers this way, so why not? Tell me what you think of this idea!

I'm tempted to count up the number of books I read each month, but I'm going to try and resist that because this is not a content. However, there are certain categories I want to be sure I stay on top of, so I've been keeping track in my bullet journal. Those categories are my Personal Reading Challenge list, Classic Book a Month Club, romance, and nonfiction. I hit them all this month.

Reading Challenge list: The Heart Goes Last by Margaret Atwood, The Awakening by Kate Chopin (post forthcoming)
CBAM: A Raisin in the Sun by Lorraine Hansberry
Romance: Anything For You by Kristan Higgins
Nonfic: Pioneer Girl by Laura Ingalls Wilder (in progress, also on my Reading Challenge list)

I read a good variety of books this month, from the literary American War by Omar El Akkad to the chick lit-ish (and way more enjoyable) Maybe in Another Life by Taylor Jenkins Reid. I also really enjoyed my re-read, on audio, of Harry Potter and the Deathly Hallows.


I don't know if this will end up being a monthly category because I tend to listen to the same music and podcasts all the time and don't see a lot of live music, BUT this month I saw Metallica in concert and that was extremely exciting! These guys know how to put on a good show.


Handmaid's Tale
Are you watching this on hulu? I am kind of obsessed. There was a point this month that I was watching this show, reading American War, and listening to HP and the Deathly Hallows and I was confused about which dystopia I was in at any given time. (Plus, the news. Also rather dystopian.)

Also watching a bit of Miss Fisher's Mysteries and Call the Midwife.

Arrabal at the American Repertory Theater
Eric and I had season tickets this year and this was the final show. It was a tango show set in Argentina. I'm not a huge fan of dancing without singing, but this was the only show of that sort I've seen that wasn't ballet and it was definitely better than any ballet I've seen. The music was great - I could have listened to that band play all day.


I am trying to get back to my knitting, which I've done very little of for the past several months because of my ongoing wrist pain. I came to a point in my East Neuk Hoodie where I realized that I kind of screwed up back on the pocket and I'm going to need to rip back and redo it. There's just no getting around it. I'm also working on a pair of socks that I just realized I haven't posted about at all. I'm on the gusset decrease of the first sock.


I've been hosting meetings with friends interested in becoming politically active, focusing on making some big changes in the 2018 mid-term elections. It's called Pizza and Politics (though I'm taking suggestions for better names!) and this month we got together and wrote letters to our senators and representatives. We live in Massachusetts so our elected officials tend to be doing what we want them to, but it's nice to write thank you notes so they know their actions and words are appreciated.

Work has been a bit nuts, especially because we just lost our really awesome teen librarian and had to hire another one. She's starting next week and she will be awesome, but it's been tough for the department to be down a person. I also presented at a conference last week, which meant I was prepping while all this (and lots of other stuff) has been going on.

We've had a lot of work done on our house since January (the bathroom and three other rooms) and then just finally finished. This coincides nicely with my burgeoning hygge obsession, so I've been carefully choosing items for the latest finished room to maximize coziness. I don't generally jump on trends, but with this I feel like I finally have a name for something I've always liked but didn't know how to make happen.

I have a membership at the Museum of Fine Arts in Boston, and I went to check out a number of exhibits this month including one on Matisse and another of photography from the Lodz ghetto in Poland during World War II.

For the past year or so I've been running a bit off and on, and it's been mostly off recently. I did manage to go a few times this month though.

The major thing I've had going on in the past couple of months is a painful, recurrent eye infection that started in early March. I had a dozen or so visits to the (adorable and super nice) eye doctor, took a whole bunch of sick days from work, tried several medications, and spent a lot of time sitting in dark rooms with my eyes closed listening to audiobooks. I *just* got a clean bill of health a couple of weeks ago and then was almost immediately diagnosed with a weird version of strep throat. This was all complicated by the fact that I'm allergic to most antibiotics. I took a sick day last August that was my first sick day in 2.5 years, so I guess I was just due. Or maybe I'm getting old and falling apart

Wow, this all makes me feel way more busy and productive than I thought, especially considering that I was sick a lot!


I'm heading to Maine this Saturday because my oldest sister is having a numerically significant birthday. Her birthday is two days after mine, and since mine falls on a Saturday this year her party just happens to be on my birthday. It's going to be a fun weekend!

The following Saturday we're having a Geek Con at work, which is sorta a small-scale Comic Con. A couple of years ago we had this amazing Doctor Who Day, and we're just expanding the theme a bit. We'll be showing episodes of various shows, having some video gaming, trivia, and a costume contest.

Work is generally stressful and crazy right now with lots of staff coming and going, and I'm also on the working group for our upcoming renovation project. I really just want things to calm down a bit so I can do some collection development projects and spend quality time with coworkers, making plans in less of a frenzy.

I've just agreed to be on a book award committee, which is rather exciting. I only have to read 3-4 books and they should arrived in mid to late June. Of course that's around the time we'll be reading books for our Community Read committee also, so I'm going to have lots of assigned reading!

That's my life in a nutshell right now! What's going on with you?