A Raisin in the Sun

A Raisin in the Sun by Lorraine Hansberry (1959) 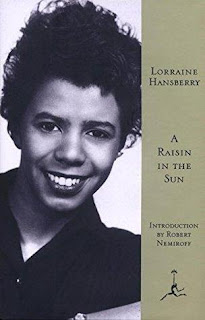 The family at the heart of this classic play live on the South Side of Chicago after WWII. They share a small apartment: the matriarch, her two grown children, her son's wife and their son. They have only a two-bedroom apartment, with a bathroom they share with another unit. They all want more: Beneatha is a smart and ambitious young woman who hopes to be a doctor but isn't sure how she'll pay for medical school. Her brother, Walter, wants to start a business but doesn't have the capital. Mama just wants a bigger, nicer house for the family in a better neighborhood. When the play begins she is expecting a large check, and there is lots of anticipation of the check's arrival and speculation about Mama's plans for it. The people in this family want the same things we all do, but a black family in 1950s America have an uphill battle when it comes to achieving their dreams.

In this edition, a few scenes have been restored from the original version. When the show was first produced they had been removed from a variety of reasons, not the least of which was the practical concern of running time for the show. But they seem important and it's tough to imagine the play without them. For instance, when the family puts a down payment on a new house and prepares to move, their neighbor, Mrs. Johnson, comes by to visit. She keeps talking about what a "proud-acting bunch of colored folks" they are, as though their desires for a better life somehow means they feel superior to others who have more modest aspirations. Mrs. Johnson also tells them about other black families who have moved into white neighborhoods and were bombed. This is important because the family also receives pressure from their future neighborhood not to move there, and the fact that they are also getting the same pressure from their own community is significant.

Another cut scene was when Beneatha changes her hair to a short afro. Her disinterest in conforming is already clear to us from her desire to be a doctor, but this change is an important outward display of her individuality. It is spurred, I think, by her relationship with a Nigerian man and her new interest in Africa. One of the things I loved most about Beneath is the way she follows her interests and tries new things. Not one to be held back by racial constructs, finances, or anything else, she has tried out a number of different hobbies, many of which required buying expensive items, like photography equipment and a guitar. When her mother and sister-in-law question why she flits from one thing to another, Beneatha says "I don't flit! I experiment with different forms of expression."

I never read plays. The handful of Shakespeare I read last year were the first plays I've read since The Cherry Orchard in college. Of course Shakespeare is all about the language - those plays are thin on plot and the characters aren't really developed. So I had it in my head that that's just the nature of plays - you really need to see them performed for them to really come alive. But this all felt as real to me as a novel. There's a decent amount of description of the setting and people's appearances, which helps. But the characters seemed so real and there was so much feeling that came through in their dialogue and the bits of direction that accompanied it. Now I'd really like to see it performed!

A Raisin in the Sun was the May choice for the Classic Book-a-Month Club. I've read three in a row and liked them all. The next two are The Confidence-Man by Herman Melville which doesn't really interest me and Paradise Lost by John Milton which, ugh, no. I may rejoin in August with some Jane Austen. They're reading Northanger Abbey, which I just read last year but I might just pick another Austen that I haven't read yet for that month.
Posted by 3goodrats at 7:30 AM