Maybe in Another Life

Maybe in Another Life by Taylor Jenkins Reid (2015) 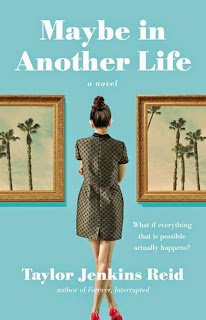 Hannah has never really felt settled. Now at 29 she moves back to Los Angeles, the city where she grew up. Her family relocated to London when Hannah was in high school, and Hannah moved in with her best friend Gabby's family. Gabby and her family are still there, so it feels a lot like going home. Also in LA? Hannah's ex-boyfriend Ethan. Shortly after moving back, Hannah and Gabby go out to a party where they run into Ethan. At the end of the evening when Gabby is ready to leave, Ethan offers to give Hannah a ride if she stays. Here, it branches off into two parallel stories. Based on this one decision, Hannah's life goes in very different directions.

Since this happens early on, I don't think it's a spoiler to say that what really makes the stories go in different directions is that in one of them she gets into a bad accident. This affects a number of major life situations. As the stories began going in their different directions I kept speculating on whether one of them would be better than the other. I didn't think Reid would do something like make one of the stories result in a real obvious downward spiral for Hannah or anything like that. I did wonder if she'd end up with a different guy in each story or if they would each bring her to the same end on that front.

Hannah talked a lot about things like fate, destiny, what is meant to be, what is supposed to happen, etc. I sort of remember these themes from other Reid books as well, but it was extremely prevalent here. It got a little irritating, mostly because I think those ideas are hogwash and I sort of wanted to slap Hannah when she got going on this topic. It's like saying that your choices don't matter and that regardless of what you do you'll end up where you're supposed to, which is a pretty good excuse why she didn't really have her life together.

When all was said and done, I was pretty satisfied with how these stories went. It's so interesting to think about the effects of even our most minor decisions. I mean, don't think about it very much, because it will drive you bananas and you will be forevermore too paralyzed to make *any* decisions (Which is, of course, a decision in itself. See? You can't win.) I like the idea that there are many different ways that each of us could live and be happy and satisfied, which makes these potentially-catastrophic minor decisions less so.

Both stories contained some very fun elements. There was a whole thing about how much Hannah loves cinnamon rolls, which has really made me want a cinnamon roll. But even better was Hannah's friendship with Gabby, which remained super strong through both storylines. Gabby is going through her own stuff, so even when Hannah has a lot to deal with (and she does, in both versions of her story), they are both really strongly there for each other. Gabby's parents are great too, sort of standing in as Hannah's surrogate parents as they've done for a lot of her life. Hannah's family situation was so odd too. I mean, her family was fine, but obviously they weren't there for her since they lived so far away. It seemed hard to believe that when they relocated Hannah was able to convince them to let her stay in the US, but then again, some families send their kids pretty far away to boarding school so I guess it's not so different.

All in all, I enjoyed reading it, but it's probably my least favorite of her books so far. The other two I listened to on audio and I wonder if that has anything to do with it. I specifically wanted to read this in print because I knew it went back and forth between two parallel stories and thought it would be too confusing on audio, and I do think it would have been. I also read it in just a couple of days, whereas an audiobook takes me a week or two to complete. Sometimes I wonder if I get more out of a book if I spent more time with it. At any rate, it was still quite good and Reid remains one of my new favorites. I'm looking forward to reading Forever, Interrupted, the only one of her books I haven't yet read.
Posted by 3goodrats at 7:48 AM

I was thrilled to see you posted a review on this today! I picked this book for the June meeting of the book club I and another co-worker facilitate for patrons at work, and I had high hopes everyone would enjoy it. We've been forced to read a long string of not-great YA books and almost everyone was ready for a change (especially me!). So I was a bit disheartened today to learn that two co-workers who read the book in advance of the meeting didn't like it -- one hated it and one thought it was ok, but just not the book for her. I'm glad to see you thought it was a decent read because now I'm starting to worry all the book club members will
be disappointed in the first book I was able to chose myself! There's kind of a lot of pressure that comes with picking a book... everyone has such varied tastes! Anyway -- I enjoyed reading your review!:)

Thanks, Lindsay! I think it will be a good book for discussion. And sometimes the most divisive books make for the best discussions so it's not terrible that some people didn't like it.