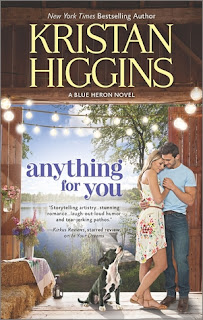 Finally I got to read the story about Jessica Dunn! She's been an intriguing minor character throughout this series and I'm so glad she got her own book. Jessica was nicknamed Jessica Does in high school because she slept around a lot. Mostly she did it to win over guys so they'd help protect her special needs younger brother from bullying. That is Jessica's life work, really - taking care of Davey. Their parents were drunks and as soon as Jessica was old enough she took Davey and moved out. She works her tail off trying to give them a good life, and that life doesn't have room for romance, especially with Connor O'Rourke.

The story open with Connor proposing to Jessica after an on-again off-again romance that has spanned decades, and she turns him down. Then we go back to their childhood, when Jessica's dog gets loose and attacks Connor, resulting in the dog being euthanized. (This was a pretty upsetting scene, so warning to those sensitive to animal deaths.) When animal control arrives, Davey is heartbroken and he never forgives Connor, who he sees as responsible for the death of his beloved Chico. Over the years Connor and Jessica hook up and break up, Jessica breaking his heart over and over again.

In most contemporary romances, what keeps the characters apart is just their own neuroses. Let's face it- there's much these days that prevents people who want to be together from being together. But this was a really good, believable setup. A woman who is completely devoted to the responsibility of caring for her brother who is unable to live on his own? And who despises her love interest? I can definitely buy that. Another of my romance pet peeves is that so many of the heroines are sexually inexperienced and need to be initiated by the hero, so Jessica was a refreshing change. (To be fair I haven't read a ton of contemporaries, but from my limited experience there are more virgins than one would think.)

Jessica's family situation was a pretty big part of the book. She is so great with Davey and I really liked reading about them. Although she feels a huge responsibility towards him, she isn't resentful at all. Quite the opposite: Jessica loves her brother more than anyone. It's a complicated situation though, and when their father arrives back on the scene swearing that he's been sober for three years, Jessica is thrown for a loop. She wants to believe it, but doesn't want to be disappointed yet again. I loved this part of the story. There was a great scene in which their father comes with them to a drum circle that Jessica takes Davey to regularly. It's not Jessica's sort of thing at all, and the scene was fairly silly, but it was fun and Davey loves it.

The romance, as I mentioned earlier, had a pretty good premise. It was really a difficult situation that felt totally realistic. I think Jessica could have been a little less bone-headed about things, but I also can understand where she's coming from. She grew up poor in a trailer park with horrible parents and for various reasons feels like she doesn't really deserve happiness. When anything good happens to her, she can't believe her good fortune and is immediately preparing herself for the disappointment of losing it. It's the same with Connor. She's convinced he'll grow bored with her, that he can do better, than there's no way they'll be able to live together because of Davey's meltdowns every time he sees Connor. Connor concocts a secret plan to win Davey over, which goes really well for a while until it completely backfires. Of course it all works out in the end, but getting there was quite a struggle.

I really have no criticisms of this story. I mean, Colleen (the heroine from Waiting On You) and Connor's twin sister, went into labor and had her baby in about 10 minutes but that really didn't affect my enjoyment of the story at all. I also find it slightly annoying that every single romance heroine changes her name when she gets married (it's 2017!) but that responsibility doesn't lie entirely with Kristan Higgins so I can't fault her for it.

I love the little town she has created and the people she has populated it with. One of the things I like most about her storytelling is her sense of humor, and the way she integrates it into stories that involve serious issues. She often does this through scenes with secondary characters. For instance, Pru and Carl, a couple who have been married since before the series started always lend a bit of humor to every situation. They're an older couple who enjoy being super open about their adventurous sex life. These stories also all have dogs in them, in this case Chico Three. Pets always add a bit of levity. (This is the second book which contained a dog toy that my dog also has. The first was Squeaky Chicken; this time it was Squeaky Purple Dinosaur. I guess we shop at the same place?)

All in all, I've really enjoyed this series and I'm a little sad that it's over. It's funny because I hated the first book by Higgins that I picked up, so I'm really glad I gave her another try by impulsively downloading a galley of the first book in this series a few years ago. I suspect that her writing has just gotten better over time so I probably won't go back and read any of her older books, but I'll be happy to try her newer ones!
Posted by 3goodrats at 8:00 AM