Harry Potter and the Deathly Hallows

Harry Potter and the Deathly Hallows by J.K. Rowling (2007), narrated by Jim Dale 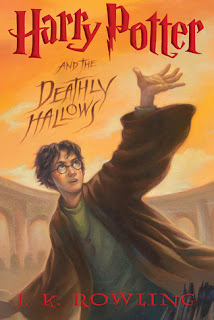 The end has come. I've just completed the final Harry Potter book on audio and now, after the final showdown with Voldemort and the death of so many characters, both major and minor, I'm a bit exhausted. I feel like I've been through a lot!

There's no going back to Hogwarts this year - Harry, Ron, and Hermione are on the run, hoping to find and destroy the remaining horcruxes and defeat Voldemort once and for all. Their journey takes them to places important to Voldemort, such as Godric's Hollow, where he was defeated when he killed Harry's parents. Godric's Hollow was also home to the Dumbledore family and to Bathilda Bagshot, author of A History of Magic. Harry learns uncomfortable truths of Dumbledore's youth and feels very conflicted, but remains determined on his quest. He also learns more about himself and his role in relation to Voldemort, which is not good news to him. It is pretty dark.

Meanwhile, Voldemort and the Death Eaters have taken over the Ministry of Magic and Hogwarts. The Ministry instituted a registry for muggle-borns, Hogwarts attendance became compulsory, and you had to prove your blood status to attend. The class Defense Against the Dark Arts was transformed into Dark Arts. There was a point at which I was listening to this audiobook, reading American War, watching The Handmaid's Tale, and reading the U.S. news, and I was seriously getting confused about which thing was happening in which dystopia. (Ok, the U.S. isn't a dystopia yet, but the are some very concerning things being casually bandied about.)

Serious battles broke out, and many died, including some pretty major characters. Kids are not coddled in this world, and when the shit really hit the fan, it was all hands on deck for the fighting and that means anyone aged 17 and up were expected to help out. This, of course, means that everyone was at risk for death and there were just so many sad moments.

But there's also hope. Many of the secrets revealed were dark ones, but many were enlightening in different ways and we finally got the truth that revealed one character in particular as much more brave and good than we thought - if only we had known before he died. But this is a book for young people so despite all the dark and ruin and death, good prevails over evil and that is what is important. My first time round with this book (and movie) I wasn't super keen on the epilogue that skipped 20 years into the future, but I really appreciated it this time. Maybe I just liked the extra assurance that things continued to go well for everyone.

I was thinking about classics and how much they permeate culture, and it's been so much fun to re-experience this one. I was already an adult when these books were released, and it's so strange now to think about how there was a time when Harry Potter didn't exist. Like, for my entire childhood and adolescence. I was trying to imagine what it would have been like to grow up with these books. There just wasn't anything comparable when I was growing up. I'm so glad I've been able to experience them even as an adult. There's just so much here about friendship and bravery and making hard choices, and the stories themselves with all the humor and fun characters are just delightful. I'm so grateful for this series.

When Harry Potter and the Cursed Child came out last year I had no intention of ever reading it, especially because it's a play, not a novel. But now that I've read A Raisin in the Sun and realized how much you really can get out of reading a play, I'm reconsidering reading it. Have you read it? What did you think?
Posted by 3goodrats at 8:00 AM