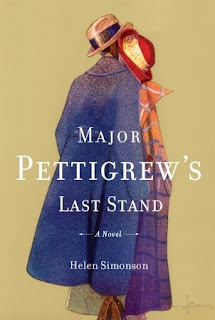 In the rural English town of Edgecomb St. Mary lives a retired Major, stodgy and traditional, who above all cherishes the set of Churchill shotguns passed down from his grandfather, one residing with him and other with his brother Bertie. When the novel opens, Major Pettigrew has just learned of his brother's death. Though grieving, he can't help but feel relieved that his father's guns will once again be reunited, but he soon faces resistance from his brother's widow and his own son. As his family drama unfolds, Major Pettigrew's newly-formed friendship with Pakistani shopkeeper Mrs. Ali is heading towards romance, to the chagrin of many uptight relatives and villagers. Meanwhile, a local landowner is brewing up a plan that could forever change the peaceful village they all call home.

The budding relationship between the Major and Mrs. Ali is the focal point of the novel, and sparks a bit of racial tension. Though Mrs. Ali was born in England and has lived in the village for decades, she is still not quite accepted, the other townspeople maintaining a polite but distant attitude. Their love story was touching not only for it's slightly scandalous nature, but also because of their age. Both widowed, the two seemed to find a particular freedom in their second chance at love, despite the discomfort of their families.

Permeating the novel is the tension between tradition and change that create friction between Major Pettigrew and his son Roger, between the local hunters and animal rights protestors, and the residents and developers. The community was so attached to their traditional ways, I didn't even realize this was set in present day until someone surprised me by pulling out a cell phone. But it was so charming, the way everyone knew each other's business and they all put on aristocratic airs and tried to impress each other at their hunting parties.

I loved pretty much everything about this book. I want Major Pettigrew to be my uncle so we can have tea every Sunday and talk about what the world is coming to and how young people don't appreciate tradition and civility anymore. (This is similar to how I want to live in Pride and Prejudice and end up marrying Colin Firth.) I loved the clashing of tradition with Roger's flashy wealth and city ways. I loved how torn Major Pettigrew felt between seeking the approval of the distinguished local men and wanting to pursue the love of Mrs. Ali. And of course I loved how he was introduced as such a stiff traditionalist and ended up being the one challenging others' notions of what is proper and acceptable. It was a such a pleasure spending time with Major Pettigrew and all the colorful characters residing in Edgecomb St. Mary. I think I'd like to visit again sometime.
Posted by 3goodrats at 8:22 PM