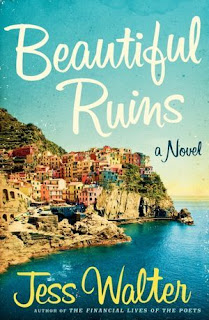 In a tiny coastal village in Italy, hotel owner Pasquale Tursi is surprised to welcome his first American guest. At first he is sure she came to Porto Vergogna by mistake, but no; she is sick, even dying, and she has been sent here because it is quiet and she won't be disturbed. She an actress named Dee Moray and she is in Italy to play a minor character in the movie Cleopatra.

Flash forward to present day Hollywood where Claire Silver fields movie pitches for producer Michael Deane while managing her loser boyfriend. But one day when she expects another bad pitch, instead she is faced with an elderly Italian man insisting on seeing Michael Deane to help him find an actress who stayed at his hotel decades earlier.

The two stories, past and present, are masterfully joined in a story spanning decades and continents. The wide array of characters could have been confusing in lesser hands, but here it enriched the story with so much more life and love and heartache. It's astonishing how much happens and how well we get to know so many different characters in the course of a book that's less than 350 pages long. But it feels languorous, not rushed, and each character becomes real and important.

Although the entire novel revolves around the actress Dee Moray, it does exactly that - happens around her. She takes surprisingly little action even as she remains central to the novel. Pasquale was my favorite character, young and eager back in the 1960s as he tried to take care of his beautiful and fascinating hotel guest. His mother and aunt were the best sort of meddling old Italian ladies. Another regular visitor to Porto Vergogna was Alvis Bender, an American who had befriended Pasquale's father when Pasquale was just a child and kept returning to the hotel work on his novel about the war. We got to read an excerpt. Similarly, an entire present day chapter was a pitch for the movie Donner! by Shane Wheeler, a minor character who along with Claire Silver became caught up in the central drama of the novel. Movie producer Michael Deane was the most despicable character, wreaking havoc on the lives of those around him as he chased fame and fortune, but even he was enjoyable in that train-wreck sort of way. Pat Bender, a drug-addled musician was surprisingly easy to sympathize with (though, hilariously, in the audio he sounds like Snake from The Simpsons.)

Though I've been wanting to read this for months, I was holding out for my library network's single copy of the audiobook on Playaway because I heard fantastic reviews of the audio production. It was well worth the wait. Ballerini does an amazing job reading - in fact, he's not reading so much as he is telling us a story. Accents required for this story include Italian, Scottish, American, American speaking terrible Italian, and more that I am forgetting, but he did each of them amazingly well. He brought each of the many characters to life individually and made it all sound completely effortless and natural.

Because I'm not the best listener and because I missed a few days of work here and there recently, thus breaking up my audiobook listening more than I'd like, I'm thinking of reading the print version as well because I'm sure I'd get more out of it. Beautiful Ruins is quite cinematic and it's no surprise that it has been optioned for a movie, which could be absolutely wonderful if it's done well. (You know, exactly the way it looks in my head.) In any format, this is a truly captivating story full of people I came to care deeply about. The beauty and romance and leisurely pace are utterly bewitching. Read it, and read it this summer - it would be perfect for those hot, slow months.
Posted by 3goodrats at 10:27 AM