August wrap-up and plans for September 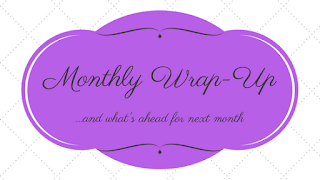 I had a lot of assigned reading this month! But I also managed to read a few things that are pretty new that I had been anticipating, such as The Gentleman's Guide to Vice and Virtue, Young Jane Young, and The Seven Husbands of Evelyn Hugo (which I'm just finishing up now.)

I finished reading for the IPNE book awards, which is a relief. I haven't posted reviews because I can't until after the winners are announced and by then they won't be fresh in my mind, so I've just decided not to review these ones.

My other assigned reading was for my library's Community Read committee, for which I read Homegoing and The Only Road. Homegoing was also on my Personal Challenge list for the year, so I was going to read it anyhow.

Reading Challenge List: Homegoing, as I mentioned, and The Fold by Peter Clines

CBAM: Ugh, fail. They were reading Northanger Abbey which I just read last year, so I was going to read Sense and Sensibility - AND count it for Austen in August as well - but I only got as far as checking a copy of the book out of the library and then returning it soon after. Boo.

Nonfiction: Another fail. But I just grabbed a copy of They Can't Kill Us All, and I have The Fact of a Body on its way to me, so maybe I'll make up for it in September.

I listened to the first two books of His Dark Materials as preparation for the new Philip Pullman coming out this fall.

I found the most amazing new podcast!
By the Book is hosted by two hilarious women who read and live by self-help books and talk about their experiences. I love it!

Unexpectedly, I also caught a live show this month. There's the old English ska band called The Selecter that Eric loves and they came to the US and played very near us. It's all about the lead singer, Pauline Black, who is 63 years old now (!) but still amazing and energetic. I'm not into going to 10pm shows in the middle of week, especially when I don't know about it ahead of time, but I saw them a few years ago and knew it was a show not to be missed!

I'm still watching Doctor Who, and I think that's basically it. I haven't watched any other show or movie. But I've watched enough episodes to get a decent amount of knitting done.

I finished my Waterfall Rib socks finally, and ripped back and restarted my East Neuk Hoodie. I'm still not sure if it's right, but the only way to be sure is to keep going and see how it turns out. It's so tempting to start another project right now, but I'm just not that kind of a knitter anymore. If I get back to knitting every day, then I can have multiple projects going.

For years, we've struggled with taking lunches to work. I know it's the way to go - both financially and healthwise - but coming up with make-ahead food that is transportable, filling, healthy, and delicious is a challenge. Plus, as much as I like a good sandwich, I don't have extra time in the mornings to prep anything so what I'm taking for lunch needs to be ready to go when I am. Recently, we've somewhat given up in that we're just not doing this together anymore. Eric is....I don't know what he's doing. I guess going out to lunch every day? I'm still bringing lunch, but at least I can just pick something and not worry about whether he'll like it, who's actually going to make the thing, etc. I have a whole Pinterest board for food. It's ridiculous. Recently I made My Big Fat Greek Quinoa Salad and Mediterranean Pasta Salad. In the summer, I like to eat lunch outside in the park behind the library, so something I can eat cold is a must. This week, however, I've been bringing prepared/frozen entrees from Trader Joe's. It's kind of a treat actually, because I haven't gone to a Trader Joe's in ages and one just opened up near me.

Soon I'll be able to make soups and casseroles again, which are good for bringing to work. But it's always an extra thing to do on the weekend. If only we cooked big meals every night, there would always be something leftover for work. But that's completely unrealistic, and usually if we make something for dinner that has leftovers, we eat them another day for dinner.

I've thought about just going out to lunch more, as there are plenty of options near my work. But sometimes I don't want to take the time to do that, or go outside the building in bad weather. It's such a dilemma.

How do you deal with work lunch? What are your favorite foods to make ahead of time to bring to work? I can use any and all advice on this!

The trip to the spa on my Bermuda cruise has sort of kindled my interest in finding good personal care products, so I subscribed to Birchbox. I really enjoyed my first box!

I'm still running twice a week, and getting back on a more regular meditation schedule.

I took a random day off from work because I have a lot of time I need to use before the end of the year, and I devoted it to going through some old photos. This is part of my effort to pull together a room we recently had redone that I've sort of taken over as my meditation room / room of solitude / happy place. The church pew I bought back in June is in there, and I've added candles and an art print that I checked out of the library and I'm keeping it all very tidy and cozy and calming because god knows I have no control over the rest of the house. That's my meditation cushions underneath the pew in the photo. I just slide them out when I need to use them.

As much as I don't feel like I've had enough summer, I do have some fun plans for fall. Next week I'll be camping for the first time in a few years and I can't wait! A couple of weeks after that is my annual trip to CT with my sisters and niece to visit my aunt. It's just a relaxing weekend of sitting around lazily and eating things, with occasional activities thrown in, but I've come to really look forward to it every year. We started doing it after my mother died so we'd be sure to still see our aunt occasionally, and I kind of wish we had started this years ago!

I don't know when this will start, but I think a couple of my friends and I will be reading Middlemarch together this fall.

How was your August?