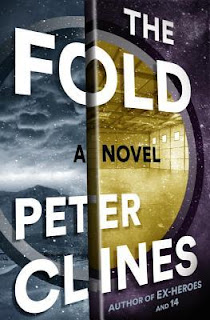 Mike Erikson looks like a young Severus Snape and has an eidetic memory. He can recall anything he's ever seen; he can watch movies in his head, and his memories never fade. You'd think he would have a really interesting job, but he's a high school teacher in a small town in Maine. Until his friend Reggie arrives one day with an offer he can't refuse. He works for an organization that has built a device call the Albuquerque Door - it can transport someone hundreds of feet when they step through it, by sort of folding dimensions to shrink the distance. His team insists that everything is going fine and they are asking for more money to continue research, but he is convinced they're hiding something and he wants Mike to observe their work and report back.

The team working with the door, however, think they are doing fine and don't make Mike feel very welcome at first. They grudgingly accept his presence because their funding relies on it, but he knows they're not telling him everything. Mike pays very close attention to their work, remembering every detail vividly, and replaying his observations when needed. He also talks to the members of the team as much as he can, becoming fairly close with some of them. Everything seems to be going smoothly, until one of them steps through the door one day - just like any other day - and it goes terribly, weirdly wrong.

I think of Clines as a horror author after reading 14, and although The Fold is maybe a little less horror and more sci fi it definitely has some horror elements. I was up far too late every night that I was reading this, and a couple of those nights some pretty creepy imagery stuck with me as I finally tried to go to sleep. The story took a few interesting turns and went ways I did not expect, and I really couldn't put it down.

A lot of science fiction focuses more on the plot, action, and science aspects, leaving the characters behind. But Clines really makes his characters come alive, and you get to know Mike well throughout the story. His memory is both a blessing and a curse, a horror unto itself the more he sees horrible things that he can never unsee. And there are some pretty creatively horrific things in this story. It was clever, fun to read, and inventive. At least for those of us who don't read a ton of science fiction - for all I know, these ideas might not be as original as I think, but I had a great time reading it.

This book was on my 2017 Personal Reading Challenge, for which I only have two specific titles left. (We won't even discuss how many topical categories I haven't even touched this year.) Clines has a new book out this fall too! It's called Paradox Bound and is described as a "timey-wimey, full-barrel adventure novel that also teaches a non-ironic lesson in American civics." It sounds great! Look for it on a future list of books that have been on my to-read list for too long, because that seems to be my pattern.
Posted by 3goodrats at 7:29 AM