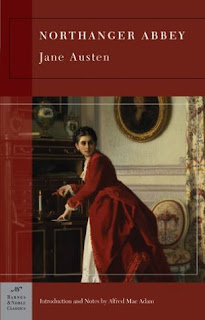 This wasn't the next Austen on my list, but library copies of Sense and Sensibility were in sorry shape and Emma was a bit longer than what I wanted to read at the moment. But, happily, it seems that any Jane Austen is good reading.

Catherine Morland leaves her family with their friends the Allens to go to Bath. After days of feeling like they don't know anyone, Catherine befriends a young woman named Isabella and quickly forms a close friendship. She also meets an intriguing young man named Henry Tilney, befriending him and his sister, Eleanor. Young and naive, Catherine tends to believe the best about those around her, even while they continue to betray and disappoint. Various romantic entanglings commence and new delicate friendships are endangered, culminating in a trip to the Tilney's home, Northanger Abbey.

I like Catherine in the way you can't help like a gullible young women who is nonetheless very well-intentioned. It pained me to see how careless Isabella was with their friendship, but Isabella was just a fickle woman whose loyalties were ever-changing. Catherine tried to do what was right, but often became confused about the motives of others, because she couldn't believe that other people were less motivated by goodness than she was. When she was on her way to Northanger with the Tilneys, Henry told her a scary story about the Abbey that of course wasn't true, but when she arrived and found the same mysterious trunk in his story she became frightened and instantly concocted a horror story in her head about the family. She felt ridiculous later, but it was delightfully hilarious.

The end of the story felt a bit rushed, and I was never drawn in by real romance between Catherine and Henry. It was clear from the start that he was her romantic interest, and there were few obstacles. Aside from how he teased her with stories of the Abbey, I didn't feel like I got to know him very well but he seemed like a nice enough young man. I was glad she escaped the clutches of a truly awful man who was interested in her for a while.

Jane Austen always writes with a bit of satire about her times, so I enjoy such passages as: "...for a fine sunday in Bath empties every house of its inhabitants, and all the world appears on such an occasion to walk about and tell their acquaintance what a charming day it is." She is very conscious of the frivolity of her characters' lives and doesn't hesitate to make some of them transparently ridiculous. Much like Mrs. Bennet in Pride and Prejudice, Isabella would totally display her faults easily in the course of a conversation, making strong assertions based on no evidence whatsoever and contradicting herself. She was funny but also exasperating.

Northanger Abbey was fun and cozy, just the perfect thing to read in winter.
Posted by 3goodrats at 8:39 AM