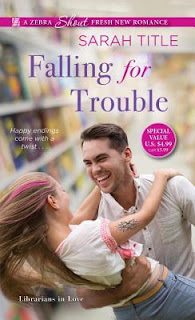 Joanna's band finally made it big, but at their first show of the tour Joanna froze on stage and was kicked out of the band. She's returning to her hometown of Halikarnassus to stay with her grandmother, who just happens to have broken her leg, so the timing works out perfectly. She'll hide for a while, help out her Granny, then leave this stupid town again, once and for all. What Joanna didn't count on was meeting Liam, the sexy director of the local public library.

The first thing you should know about this author is that she is a librarian. Because I'm going to tell you, there is nothing more painful for me to read than a non-librarian writing fiction about libraries and librarians (and I'm sure that goes for other professions, too) because they inevitably get it all wrong. Not this lady, though - she knows what's what! From the anecdotes about patrons to the very real budget struggles of a small library, Sarah Title has nailed it. What a relief!

So, back to our story. Liam loves the town of Halikarnassus as much as Joanna hates it, and he's dedicated to making sure the library provides much-needed services to everyone in town. The mayor, though, has other ideas about how the town's budget should be spent, namely by making expensive improvements to their sports facilities. (Isn't that always the way?) Definitely not a reader, the mayor doesn't grasp even the basics of library service and is constantly making stupid (but believably stupid) arguments about why the library shouldn't have to, say, buy new books all the time. Meanwhile, Joanna's grandmother Peggy is an avid library user and advocate. While she's laid up with her broken leg, she must send Joanna to the library for her books which, of course, results in Joanna and Liam crossing paths a number of times and being very drawn to each other despite their outward-seeming differences, she being a rocker and he a librarian.

The main conflict in the story is that while the two are becoming involved right away, there's an understanding that Joanna is only there temporarily and the relationship can't last. As far as conflicts go, it's not a huge one - it doesn't really keep them from being together - but it's a welcome respite from the typical neuroses that often serve as the main conflicts in contemporary romances.

I enjoyed Title's writing a lot, easy and breezy with a healthy dose of humor. I loved the moment early on when the mayor points out that sports equipment like shoulder pads would protect children, saying "New books won't actually do anything for kids, would they?" and Liam responds with "Are you fucking kidding me?" Only when silence fell did he realize he had said that out loud. Later, in another conversation with the mayor, Liam became so frustrated that "he wished he was holding a pencil so that he could break it in half. But then Hal would probably cut his supply budget because now he had two pencils." It was all so enjoyable to read!

If I were going to write a romance novel, it would pretty much be this one. But of course I won't ever do such a thing, so I'm very glad that Sarah Title has done it for me. I heard of the first book in the series, The Undateable, when it came out, but it was the plot description of Falling for Trouble that really caught my notice. Now that I know I like her writing, I'll likely try others in the series. The Undateable is about a college librarian and the forthcoming Laws of Attraction is about a law librarian. I like that she's mixing it up with different kinds of librarians - how fun!
Posted by 3goodrats at 9:26 AM