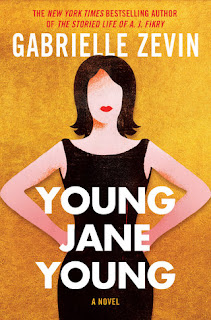 When Aviva Grossman was in college, she worked as a congressional intern and had an affair with her boss that became public. Much like Monica Lewinsky, Aviva was then slut-shamed and though the story was soon overshadowed by the events of 9/11 she was never quite forgotten. The story of her downfall and invention is told in five parts, from five different perspectives.

I don't want to say too much about the plot, or who tells different parts of the story, because it's too much fun to discover all of that for yourself. But I can tell you that Aviva had a very difficult time getting a job after this scandal broke. And that the first part of the story was told by Aviva's divorced mother about a series of first dates she goes on when she's in her sixties. And part of the story is told through a series of emails written by a precocious young girl to her Indonesian pen pal. And that the final section of the book is written as a Choose Your Own Adventure.

Young Jane Young was just released on August 22, but if you can snag a copy soon I'd recommend it for one of your last days at the beach. It's easy and quick and enjoyable to read, but it will also give you some food for thought. I'm still mulling over a few things that, to me, seem a little unresolved. I have questions. The main theme, of course, is about slut-shaming and how to move past the errors of one's youth. (Monica Lewinsky did a great TED Talk about her experiences, by the way.) It's also about infidelity and the ways women respond to unfaithful husbands, as well as mother/daughter relationships.

In case you can't tell, this is an unabashedly feminist novel. Some of the characters claim not to be feminists, as many women in real life also do (though I've honestly never understood those women.) There's a discussion about moving out of the way for people on the sidewalk, and how some men just seem to assume the crowd will part for them; when Aviva sees a man she dislikes walking down the street like he owns it, she decides she won't step aside as everyone else is doing and has a small but triumphant moment when he must step aside for her. There's a brief conversation about "gaydar" in which someone points out that it's just based on prejudice and people with gaydar are actually bigots. (Which...right? Isn't gaydar just stereotyping?) The aforementioned young child has a transgender teacher and learns a couple of lessons about what that means and how to speak respectfully about trans people (though, unfortunately, she wasn't corrected for her use of the word "transgendered.")

The more I think about it, the more I think this could be a good novel for a book group. I imagine some great discussions about escaping from the past, who has the right to know what about other people, controlling information about oneself and meddling in other people's lives, and of course publicly shaming women for doing the same things men do all the time with barely any repercussions, and various other feminist issues. But whether you read it with a group or alone, if you like funny, feminist novels you should definitely read it!
Posted by 3goodrats at 7:30 AM