In the Shadow of Liberty

In the Shadow of Liberty: The Hidden History of Slavery, Four Presidents, and Five Black Lives by Kenneth C. Davis (2016) 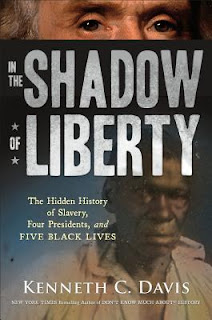 When we learn about U.S. presidents in history, what is often left out of the stories is that many of our early presidents owned slaves. In fact, the centrality of slavery to the formation and growth of the United States is barely, if at all, menioned. Kenneth C. Davis is telling exactly that part of our history in his book for teens which focuses on the lives of five enslaved people who worked for presidents. Billy Lee, Ona Judge, Isaac Granger, Paul Jennings, and Alfred Jackson were slaves who worked for George Washington, Thomas Jefferson, James Madison, and Andrew Jackson.

Of course these presidents all had a whole slew of enslaved black people working for them, many of whose stories have been lost to history. The lives of black people in early America weren't documented as they were considered property, not people, and even the stories of these five people had to be pieced together, sometimes imperfectly. Kenneth C. Davis (and I think it's worth mentioning that he's a white man) has endeavored to tell their stories as respectfully as possible. He usually uses terms like "enslaved people," pointing out in his "Note to the Reader" that he hopes this will emphasize that they were people with a condition forced upon them, and that it doesn't define who they are as the term "slave" does.

I'll admit that I haven't read as much about slavery as I probably should have. I've picked up some things over the years from my fiction reading, movies, and that sort of thing but I don't recall when (if ever) I've read an entire book on the subject. It was completely glossed over in school when I was growing up, just a line here and there in a textbook that we read out loud in class but didn't really discuss in any meaningful way. And of course most of what I learned about the early presidents amounted to hero worship, as though they weren't regular people who lived in the context of their times like everyone else. A lot of the way I remember learning history was just a collection of facts that didn't really come together to tell any sort of story. I sure wish we had read a book like this in school.

Some of the details we got included the early lives and family background of the enslaved people, their skills and interests, and their relationships with the people they were forced to work for. The presidents had varying relationships with their slaves, but often considered them part of their families, which is very strange when you think about it. Some of the presidents were actually against slavery, so owning slaves seems pretty hypocritical. Of course, in some cases had they tried to free their slaves, they just would have ended up being "owned" by someone else, so maybe they were better off staying with someone who had appreciation for the unfairness of their positions. Davis doesn't try to gloss over the hardships endured by enslaved people who were often separated from their loved ones and had to work cruelly long hours. I did notice that a passage about Thomas Jefferson and Sally Hemings didn't at all dwell on the fact that she was a teenager when she first bore a child by Jefferson and didn't note that their relationship was almost certainly not consensual. Is this because the book is geared towards young people? Or did the author just not get into the details of the Jefferson/Hemings story because that wasn't his focus?

Between chapters were timelines of historic events in the U.S. especially having to do with slavery. On these pages Davis also included periodic population numbers, noting how many of the population at that time were black, and how many were enslaved. At one point 1/6th of the U.S. population was enslaved. When I think about these numbers, it paints a very different picture of the United States than I've ever had from studying history or even watching period movies.

Although it was an informative nonfiction book, which I never enjoy as much as I do a good novel, I found In the Shadow of Liberty to be pretty fascinating reading. The author's style was easy to read, there were a lot of illustrations, and I learned a lot that I didn't know. Honestly I have no idea if there are other books like this for young people, but I like to think this isn't the only one that tries to tell a truer version of history than we all learned a couple of decades ago, and before. It made me want to learn more about certain parts of U.S. history.

I read this for my Not-So-Young Adult Book group, but it satisfies a category for my Personal Reading Challenge. The category is U.S. History/Politics and I'm not sure what I had in mind with the "politics" part, but this was certainly about U.S. history. I have two more titles and two more categories on my challenge, which means I'm doing better than I predicted a couple of months ago.
Posted by 3goodrats at 7:30 AM