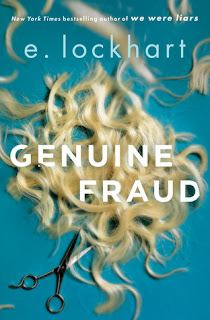 When the story begins, Jule is relaxing at a resort in Mexico. We know that she was best friends with Imogen, who has committed suicide, and that she's on the run. The story is told backwards, each chapter taking place before the previous one (and they are even numbered backwards), and each one revealing more of Jule's story.

It's very difficult to write about this book without giving away too much, but there are a few things I can tell you. Jule and Immie's friendship was not a healthy one. Jule is dishonest about who she is, in different ways to different people. The story travels between places like Martha's Vineyard and London and Puerto Rico. Immie is very rich and Jule is not. Crimes are committed.

Neither Jule nor Immie were likeable at all, at least from my perspective. I didn't hate them, they just both had issues and I wouldn't want to be friends with them. But I did like reading about them! In fact, I kind of wanted more. I'll admit the book left me a little unsatisfied, partly because I didn't feel I got enough of either of them. There were a couple of other characters in the book also, Immie's boyfriend Forrest and another friend named Brooke. I didn't get to know Brooke very well, but I didn't especially like Forrest. The cast of unlikeable characters actually added to the mystery of the story rather than detract from my reading pleasure, which was a nice surprise.

I was skeptical of the backwards format and thought I would be confused, but it wasn't confusing at all. Each chapter began by saying how far before the last chapter it took place, so I was always oriented. I really appreciated that, and I think telling the story in that order worked well.

Reviews characterized Genuine Fraud as a thriller and claimed it was suspenseful, neither of which I agree with. I went into it expected more suspense, more tension, more surprises but that's not what disappointed me. A story told backward like this, revealing more itself as it goes is still interesting even without shocking surprises - it can be more about the how and why. However, I didn't get enough of that. I still don't understand Jule's motivations here, nor did we ever get the full story of her childhood which was alluded to so many times.

It was fun to read - I definitely wanted to just drop everything and spend every moment with this book! But it also left me wanting more. It's a good book that I enjoyed reading, but for me it doesn't live up to either We Were Liars or The Disreputable History of Frankie Landau-Banks.
Posted by 3goodrats at 7:30 AM