The Fact of a Body

The Fact of a Body: A Murder and a Memoir by Alexandria Marzano-Lesnevich (2017) 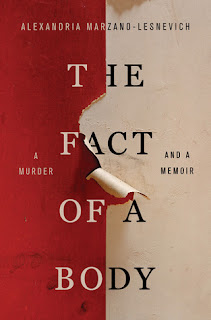 Alexandria Marzano-Lesnevich went to Louisiana for an internship at a law firm, where she learned about the case of Ricky Langley, who was convicted of murdering a 6-year-old boy. He was a pedophile and the more she learned about his case, the more memories it brought back about her own childhood and the grandfather who had abused her. The story of Ricky Langley and the story of Marzano-Lesnevich's childhood are both told in alternating chapters, resulting in a book that is both true crime and memoir.

Neither story is simple or straightforward. Ricky's life even began in a strange way, born while his mother was confined to a body cast after an accident that killed two of Ricky's siblings. At the time of the murder, Ricky was living with a couple and their two kids. Apparently the man, Terry, had been known to abuse at least one of his own kids. Ricky maintains he did not sexually abuse the young kid before murdering him, but there was some physical evidence showing that he was possibly abused at that time. However, DNA tests showed that evidence wasn't related to Langley. Just a few months after the murder, Terry drove his motorcycle into the side of a moving train, killing himself and his son. Ricky kept asking for help and it was denied. He tried to educate people about pedophilia in an attempt to help deal with other pedophiles and nobody wanted to listen. He wanted to be in prison so he wouldn't hurt anyone.

Marzano-Lesnevich, coincidentally, also lost a sibling. She and her brother thought they were twins until it was revealed they were actually triplets, and their sister died as an infant. Her grandfather sexually abused her and her sister for several years. As if the abuse itself weren't enough, her family later denied that it ever happened. Her parents consulted a child psychologist at the time who advised them not to press charges, not to even confront the abuser, in an effort to minimize impact on the kids. As an adult she overheard a conversation at a party in which her father told someone, and I think he was laughing about it, that she was the only one who remembered the abuse. Her sister made a conscious decision to pretend it never happened.

Reviews of the book make too much of the author's views on the death penalty and her reaction upon meeting Langley, when she suddenly felt that she wanted him to die. I thought this whole book would be about how her feelings about capital punishment changed through this case, but it wasn't. There is so much to this story, to both stories.

Her writing is beautiful and evocative, and I became completely wrapped up in both stories. Part of what made it so immersive are the detailed descriptions that go beyond what you normally find in nonfiction. She cleverly achieved this by using words like "maybe" and "perhaps" to describe what things may been like for a particular character. For instance: "Standing outside is a woman. Maybe she's leaning against the side of the building, one hand resting on the top of the trash can, her head thrown back as she exhales into the night sky." In this way, she was able to paint a scene quite vividly without actually making it into fiction. It was brilliant.

In fact, the whole book was brilliant and powerful and thought-provoking. If you like true crime or memoirs - and especially if you like both - I highly recommend reading it.
Posted by 3goodrats at 8:51 AM