They Can't Kill Us All

They Can't Kill Us All: Ferguson, Baltimore, and a New Era in America's Racial Justice Movement by Wesley Lowery (2016) 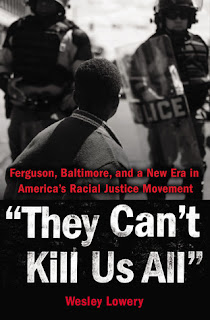 If you've paid any attention to what's been going on in the United States in the last several years, you know about the deaths of Michael Brown, Freddie Gray, Tamir Rice, Philando Castile, and many other black men at the hands of the police. Journalist Wesley Lowery was on the ground in Ferguson, MO and several other cities over the course of the year, observing the aftermath of these shootings close up. His book is a different perspective on the stories we're familiar with, but it also puts these recent events in a larger historical context of racial justice movements.

This was not at all a pleasant book to read, though it was short and fairly easy to follow. It's just not a story one wants to delve into for pleasure so I sort of had to force my way through it. I knew about all these deaths already, have closely followed the aftermath (well, from afar anyhow), and have made a point in the last year or so to read about race and policing and related issues. It's not a pretty picture.

I remember after Michael Brown was shot, when Ferguson was in chaos, and many well-intentioned people pointed out how unnecessary the rioting and burning and looting were. But what many of us didn't realize is that police had been shooting black people in that neighborhood for years, and before it blew up into a newsworthy revolt it didn't grab anyone's attention. This particular shooting was the straw that broke the camel's back, and the people of Ferguson made sure everyone knew about it.

The fact is that police are all local, the decentralization making it hard to hold them accountable at any but the most local level, and they have an almost unilateral right to kill people. This is horrifying. And it doesn't help that our police forces have the power to arm themselves with military equipment. Their job - or so I was always taught - was to keep the peace. But as Lowery describes in one scene about a demonstration in West Baltimore, it was volunteers who had to stand between protestors and police and de-escalate. Why aren't police taught to de-escalate situations? It looks an awful lot like they don't want to. And no, not all police are horrible. Lowery includes a passage when a Black Lives Matter volunteer named Mica Grimm attended a small conference at the White House. A police chief in attendance slipped her a note saying "Don't be deterred from speaking truth to power." Yet the violence and racism is undoubtedly systemic and pervasive.

It made me so mad, and I was already mad about this. I'm mad that we have to come out and say things like "black lives matter" AND that so many people are upset by that statement. I'm mad that this is all ingrained into the fabric of our society in such a way it's hard to get at, and it feels like there is literally nothing I can do about the injustice. Lowery includes the following Einstein quote: "The world will not be destroyed by evil, but by those who watch without doing anything." This is similar to the oft-quoted "First they came for the Socialists..." piece, and it's all true. I guess just speaking out whenever there's an opportunity, protesting when there's a protest, and learning as much as possible about these issues is a start. I'm sure not going to sit by and just watch it all continue to happen. I'm sorry it's taken me this long to even realize the extent of the problem.

Anyhow, this is less a review than an angry diatribe about racial injustice in the United States, but I do urge you to read this book if that's something you want to learn about. (And you do, right?) I've already read The New Jim Crow, which I think should be required reading, and this is a great follow-up as it gets into events that have happened since The New Jim Crow was published. I'd love other suggestions of books on this topic if you have them.

This book fulfills the "race" category of my 2017 Personal Reading Challenge. I've read other books this year that would probably have fit, like You Can't Touch My Hair by Phoebe Robinson and Born a Crime by Trevor Noah. But I wanted to pick something that focused exclusively on race and this was the first one picked up that does so. I've ready plenty of articles, watched YouTube videos, and listened to many episodes of the Code Switch podcast, so it's not as though I haven't been paying attention to these issues, but this is the first book I picked up this year focused solely on race.
Posted by 3goodrats at 7:30 AM