Miracle Morning: The Not-So-Obvious Secret Guaranteed to Transform Your Life (Before 8am) by Hal Elrod (2012) 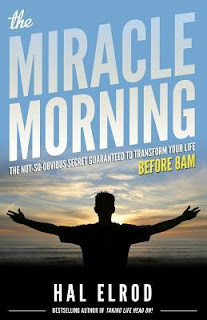 I wasn't going to post about this book that I picked up impulsively and was very cynical about. I mean, when I saw the "before 8am" part, I almost didn't open it. But the thing is, as much as I hate getting up early, I've always thought I'd be way more productive and together if I made it a habit to get up at an excruciating hour and get stuff done. I think I first heard about this book in the FB community for the By the Book podcast - which you should totally be listening to. It's two women reading and living by self-help books and talking about their experiences. A couple of people suggested this as a future book, and then it popped up somewhere else - a blog? A list of recommend self-help books? - and that was enough for me to request it from the library.

The basic idea of the book is that you should start your day with a series of activities abbreviated with the handy acronym SAVERS. Silence, Affirmations, Visualization, Exercise, Reading, Scribing. Silence is meditation or prayer, and I already meditate, but not in the early morning because for a time I did get up extra-early to meditate and it just felt like an extension of sleep. Affirmations are new to me (I just think of Stuart Smalley, and Elrod admits that was also his first thought) but apparently the idea is that you rewire your thinking about yourself by replacing your negative thoughts ("I always screw up everything!") with positive ones ("I am a competent professional who excels at my job".) It makes a sort of sense. Visualization is basically what it sounds like, visualizing what you want your life to be like. Exercise is exercise. Obviously. Reading refers specifically to that related to personal development (i.e. self-help books), and Scribing is writing (because SAVERW is not a good acronym) and can be anything, but Elrod recommends writing in a journal.

The book is only about 128 pages, which includes a lot of padding and repetition because honestly this is not a difficult concept. There's also a lot of the irritating cheerleading that is present in pretty much every self-help book ever. You can make your life whatever you want it to be! If your life isn't awesome, it's your own fault! You can make a ton of money if only you want it enough! Seriously, he says that if you surround yourself with wealthy people you will be wealthy. Most infuriatingly, he says that 95% of people are just settling for mediocrity because they can't be bothered to make their lives better. Yes kids, most people are lazy and they suck. Super nice, Elrod. Way to show compassion for your fellow humans. As much as he insists he's not blaming people when bad things happen to them, he really sort of is. Oh, and he also says that writing a bestseller is "easy." Ugh. Anyhow, I ignored the stuff that annoyed me and focused on the bits that seemed helpful.

One thing he said really stuck with me. He talked a little about one's life purpose, a concept that I find frustrating and confounding. I don't know my life's purpose and with a lot of self-helpy stuff, you can't go anywhere if you don't know that. Anyhow, Elrod said at one point that it's not something you "figure out," you "make it up, create it, decide what you want it to be." It might be a semantic nuance, but the way he put it makes me feel so much better. I can totally just pick something! And then if it doesn't seem right, pick something else! This makes so much more sense than the idea that you must look deep within yourself to try and discover your life's purpose which is surely hidden in there somewhere.

There are some practical considerations to doing all these 6 things before getting for work. He suggests either a 30-minute or 60-minute Miracle Morning, with some suggested breakdowns for how much time to spend on each activity. My concern, though, is the time it takes to move from one to the other. And, like, the first day I tried doing all the things, I started with meditation and spent the whole time thinking about how the other activities would go and what order I should do them in and I never write in a journal so what should I write about? Elrod says that he arranges everything he'd need the night before so it's all ready for him when he gets up. Journal, yoga DVD, etc. This makes sense. I suspect that some of the other kinks might work themselves out with practice.

I'm still concerned about the actual getting-up-early aspect though, which I think is where I'm going to get stuck. I wonder if it's enough to just do all these things every day and not necessarily all in the morning, but I guess the idea is that you're starting your day off making sure that you feel like your best self before you tackle everything you need to do. I don't know how much of this I'll implement, but I do know that currently I'm not off and running in the mornings, and I don't always go into work with the best mindset to do a good job, so I'm willing to try. I'll be sure to let you all know how it goes in my monthly wrap-up!
Posted by 3goodrats at 7:09 PM