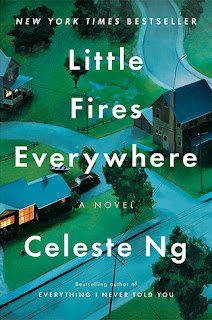 This book has been incredibly popular since even before it came out last fall. The description didn't really grab me - a bunch of people in a snooty suburb and a controversy involving a white couple adopting a Chinese-American baby. Meh. Not having read Celeste Ng before, I wasn't sure what the great appeal of this book was, but I impulsively decided to put myself on the hold list to find out.

It is indeed about lots of white people in a suburb, and not just any suburb. Shaker Heights is a planned community with extremely strict rules. There are only 3 styles of houses, and there are laws about what colors can be used to paint each style of house. Trash is not brought to the curb where it looks unsightly, but left behind the house to be collected by people on scooters. (Although this is a work of fiction, I don't think Ng made this stuff up. She's lived in this community.) In other words, this community places a very high value on appearance.

The story opens with the Richardson family standing outside what used to be their house, but which is now a burned-out shell. They all seem to know that Izzy, the youngest of the Richardson family, is responsible. It's quite an opener. It then goes back to the beginning of the story, when a single mother and her daughter move into a rental house owned by the Richardsons. Teenage Pearl befriends Moody Richardson, while her mother Mia starts working for the family. At this point, very little happens for quite a while. As much as I liked getting to know these characters, I started getting bored. However, once the real action starts, it's easy to see how important all that setup was.

A couple who is friends with the Richardsons are in the process of adopting a baby who had been abandoned, and who they've been caring for now for several months. They've been desperate for a child for years, and it seems that finally their dreams have come true. But then, it seems less sure that the adoption will go through because of something that I won't go into in detail. Mia is involved, and the Richardsons are involved, and everyone who isn't directly involved has an opinion, often a pretty strong one. There are several plotlines that involved pregnancy, birth, and motherhood, and the different choices that women make. Ng doesn't judge anyone - rather she reveals the complexities involved in all the situations.

There were also a lot of class issues, both in the story of the pending adoption and in the relationship between the Richardsons and Mia and Pearl. I disliked Elena Richardson, the mother of the family, who was apparently pretty progressive as a young person, but now that she lives a conventional and comfortable life, seems to think it's the only way to live. She also seems to think that she and her family and their ilk are better than people in other socioeconomic spheres. (Spoiler: they're not.) Her kids, though, were mostly better people than she was, though to some extent they were also products of the environment in which they were raised. I liked Mia and Pearl a lot. Mia was an artist who initially was supporting herself by working as a waitress until Elena insisted she come work for the Richardsons. Then, of course, Elena expected incredible gratitude and loyalty from her, because in her world social relationships contain a complex system of debt and payment. Ugh.

When all is said and done, I was very satisfied with the book. The characters and the plot were well-crafted, and it leaves the reader with a lot to think about. Just reading Ng's writing is quite a pleasure. This would be a great pick for a book group - there's so much to talk about!
Posted by 3goodrats at 8:59 AM