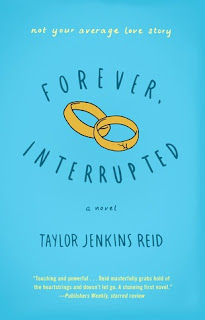 I've been reading all of Taylor Jenkins Reid's books, mostly on audio, and all I had left was this one, which I believe was her first book. All I knew going into it was that it was about a young woman whose husband is killed. It turns out they were only married nine days - though I don't know if that's better or worse than if they were together longer - and the story goes back and forth between the current time period and the time before he was killed, starting on the day they met. It was a whirlwind romance and one of the things Elsie needs to deal with after Ben's death is the fact that he never told his mother about Elsie at all.

Elsie is a librarian, and it is clear that Reid did not do even 10 minutes of research about what that means. It is implied that her library degree is a bachelor's (rather than a master's), and because she went into library science she was making more money right out of school than her peers. (HAHAHA.) At her job, she doesn't work on the reference desk because that is left to those without degrees. (What?) Instead, Elsie appears to spend 95% of her time researching topics for displays, and the rest of it shelving or filing things. None of this is based on reality. Reading a few job ads or a short career profile online would have cleared that up right away. I tried to ignore all of this, but my god it was so annoying. And I hate to spoil things by talking about things that happen late in the book, but I'm going to. Elsie literally punches a library patron and doesn't get fired. In fact, although she's arrested she doesn't even get disciplined at work. She works for a municipality - this is completely unrealistic. I could go on about how laughably ridiculous everything was that related to her job.

I also had some minor issues with the aftermath of Ben's death. Like, why did nobody from his life appear aside from his family? Didn't he have friends? Coworkers? Someone outside of family who cared about him enough to go to the funeral or contact Elsie? And I thought his mother handled his death a little too well for someone who was still getting over losing her husband three years ago. It seems like this would have compounded her grief, but instead she was a pro at it because she had just gone through this all not long ago.

I didn't hate it all. If I had, I would have just stopped listening. I liked the whole premise of the story, and having such a young woman lose a spouse is unusual. When you add all the complicated circumstances surrounding their whirlwind relationship and 9-day marriage, there is really a lot to think about. After Ben's death, Elsie met his mother and I really like how the relationship between these two women evolved. Elsie also had a friendship with an elderly library patron named Mr. Callahan, and I also really enjoyed their relationship.

In many ways, it was much like her other books (except The Seven Husbands of Evelyn Hugo, which is very different from all of them), but not as good. It's got her trademark breezy style and relationship story with a bit of a twist, but it just wasn't as convincing to me somehow. I just couldn't get into the story of their relationship because it went so fast it was bordering on insta-love. Also I am a super-cynical middle-aged married lady and while I love a good romance, I can't take young people falling instantly in love super seriously. Come on, you barely know each other.

If you are not a librarian and not a cynic, you might like this book more than I did. Some of my criticisms are more about me than the book (except the poor research - you should always do research) and even with those, I still finished it. I still listened every day on my commute, wanting to know where the story was going. I also just like Reid's style of writing, the relationships and the emotion in all her stories. The narration was good too, which made it all go down easier. It was her first book and I've read and enjoyed everything she's written since then, so it really doesn't affect my overall opinion of this author. In fact, I also just learned that she has a new book coming out in 2019 and I'm already looking forward to it!
Posted by 3goodrats at 10:32 PM