The Girl is Trouble

The Girl is Trouble by Kathryn Miller Haines (2012), narrated by Rachel Botchan 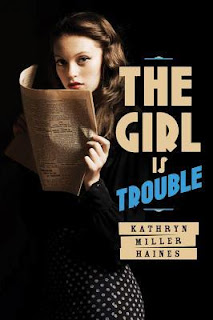 I recently re-read The Girl is Murder for my Not-So-Young Adult Book Group, and it spurred me to finally listen to the follow-up. In the first book, Iris and her dad had recently moved to the Lower East Side. He was injured at Pearl Harbor and her mother committed suicide, and now Iris had to leave her private school and nice neighborhood and live with a father she barely knew in modest accommodations while attending a new public school. He's a private investigator and she started helping him on cases, which he wasn't crazy about, and specifically one case involving a missing boy from Iris's school.

But now, we're getting back to Iris's mother's death. In the last book Iris heard a rumor that her mother had been having an affair, which maybe factored into her suicide. Now it looks like maybe it wasn't suicide at all. Meanwhile at school, someone has been putting anti-Semitic notes in the lockers of Jewish students, and Iris has been asked to investigate. It's World War II after all, and there are Nazi sympathizers even in the U.S. Although Iris herself is Jewish, she had felt relatively untouched by these sentiments though she was aware of Hitler and his ideas.

Iris and her friend Pearl have a conversation in which Iris mentions suspecting someone of being behind the notes, but says she can't believe it about them but if they did it they must have a good reason. Pearl says something very insightful to her. She says that even if it's her best friend she can't excuse them for it, because that's what leads to situations like in Europe. You need to speak up when someone does something wrong even if you like the person. It doesn't matter if they're a good person otherwise. The Nazis came to power in Europe because of otherwise good people being excused for bad behavior. I'm paraphrasing, but that was the gist of it and it was a very powerful moment in this story, and also true. It's a valuable lesson for all of us, not just Iris.

There's so much more about this I found fascinating and relevant to any time where there's a rise in hatred towards certain groups of people and society is divisive in response. It gets very morally questionable in a way that I found kind of fascinating. It could lead to some great discussions, I think!

All the while, Iris is trying to chase down the person who she thinks murdered her mother, while ascertaining how much her father knows, and trying to figure out how her uncle Adam fits in. Plus, she's pretty sure her dad is hiding something from her and lying about where he's spending his time. She's also seeing a boy named Benny, who she became interested in during the first book, despite the fact that he insists on calling her Nancy Drew. (Ugh, boys and their stupid nicknames.)

As much as I liked the first book, I think this one was even better. Everything about the anti-Semitic notes at school, and the mysteries surrounding her mother was just SO interesting when you start finding out the secrets. Although it's a sequel and I do recommend the first book, I think this one can stand on its own. They were both great on audio too!
Posted by 3goodrats at 7:30 AM