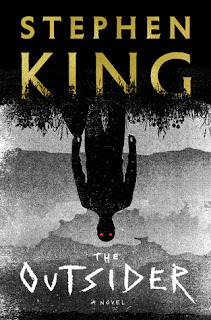 A child is horribly murdered and mutilated, and all evidence on the scene points to an unlikely suspect - local Little League coach and all-around great guy Terry Maitland. However, Maitland also has an air-tight alibi. He was out of town with several of his teacher colleagues at a conference and was even caught on film at right around the time the child was killed. But how can you argue with DNA evidence? Detective Ralph Anderson and his colleagues don't think you can, but after arresting Maitland publicly and learning of his alibi, he has a lot to answer for. This is just the beginning of Stephen King's newest novel, which goes on for over 500 pages and ends up somewhere unexpected.

Somehow, I thought this book was more of a crime/mystery novel than traditional Stephen King fare. It's definitely about a crime, but things got pretty weird quickly. Without giving too much away (because everything I describe above happens very early) I will mention that the story brings in some elements inspired by folklore which can, of course, be incredibly creepy and I like how it was used here. There was also a real-life tragic event that happened in the past at a tourist attraction which also lent quite a creepy feeling to the story.

If you've read King's Bill Hodges trilogy you'll recognize one character, Holly Gibney, who is intriguing enough in her own right to make me want to finally pick those books up. As always, King seems to pull his characters out of real life, each one fully-formed and multi-dimensional as people you see every day. I don't know how he does this. They're all imperfect - some more than others - and watching Ralph Anderson grapple to explain something inexplicable, or Marcy Maitland try to reconcile her husband with the horrible person who committed a violent crime was satisfying, but familiar to anyone who's read Stephen King before.

The Outsider is pretty long, and I spent a full week and a half reading it, but it was well worth the ride. I can't exactly say I enjoyed it, as so much of it made me feel rather uncomfortable and a bit icky, but it was so well crafted and satisfying and I definitely liked spending time with these characters as they tried to unravel this strange mystery.
Posted by 3goodrats at 9:06 PM