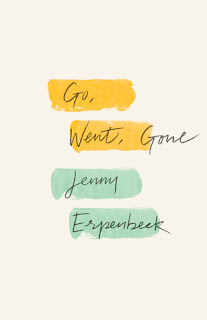 A newly-retired professor in Berlin is faced with empty, unstructured days. Not long into his retirement, Richard learns that a group of African refugees are demonstrating in Alexanderplatz. He becomes curious and goes to visit them, becoming very invested in their lives as he continues to learn their stories and educate himself about their home countries and the situation they are now in.

They came from different countries in Africa, all by way of Libya. From there they made it to Italy and were there for a while before ending up in Germany. This complicated route also complicated their legal status, so although they all wanted to find work and start their new lives, they were instead relegated to temporary shelters where they need to wait for their cases to be processed. Richard stuck with them as they were moved to a different facility, and tried to help them with their cases as much as possible.

There was so much to like about this book. Richard's quiet, routine life. The way he was drawn slowly into the lives of these men just because he didn't have much to do and his curiosity was piqued. There was a point at which I was afraid he was just being nosy or a half-hearted do-gooder white person, but he really cared and he took steps to try and help, with little regard for his own comfort and convenience. He really was a decent human being who wanted other human beings to have the lives they deserved.

I loved how closely he listened to the stories the refugees told him, and how he started spending time learning everything he could about their countries and their situations. He really thought about what they were going through, and what it must be like to be in their situations. It spilled over into his private life, of course, through conversations with various friends. Some also took up the cause, while others were less empathetic.

He's not perfect. He had a lover, even while his wife was alive, and he doesn't feel bad about it. Even as he visits the refugees, he becomes attracted to the Ethiopian woman who is teaching them German, and tries to maneuver opportunities to talk to her. But his heart is in the right place, and he's a humble man who is willing to admit what he doesn't know and tries to learn as much as he can in order to be a better person.

The writing was lovely, which I always feel strange commenting on when the book has been translated because I don't know how faithful it is to the original. But much of the pleasure of this book is how it's written. Here's a passage I like:

"He walks past the vacant lot where until recently a large villa stood with bay windows, a glassed-in veranda, and carved wooden ornaments, but now there's nothing but pallid sand waiting for the new construction to begin-- there's no better way to make history disappear than to unleash money, money roaming free has a worse bite than an attack dog, it can effortlessly bite an entire building out of existence, Richard thinks."

Through it all is another small thread, in which a man drowned in the lake near Richard's house last summer and the body has not yet been recovered. Nobody will swim there, except tourists who don't know better, and Richard thinks about it now and then throughout the book. It's just a little thing in the background, but it somehow added to the overall feeling of the story. Similarly, Richard often hearkens back to the days when Berlin was divided by a wall and he lived in the East. Borders are important in this story.

This isn't a fast-paced novel by any means and there's not a lot of action. It's literary to be sure (even though I'm not certain exactly what that means.) It's quiet and introspective and rather beautiful. Of course it's also timely, with today's divisive conversations about immigration and who should be living where, and what reasons are good enough to seek asylum in another country. It hasn't garnered a lot of attention - I hadn't even heard of it until I received it as a gift - but it absolutely deserves to be widely read.
Posted by 3goodrats at 7:30 AM