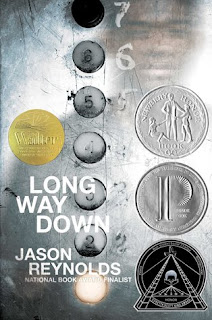 Long Way Down is a novel in verse about a teenager named Will whose older brother was just shot and killed. Will has been taught the rules since a young age: no crying, no snitching, get revenge. So he finds his brother's gun and sets out to get revenge on the person he's sure is responsible for his brother's murder. He gets in the elevator and starts down. On every floor, another person gets on - a person who is dead and who tells Will another part of the interconnected story leading up to this moment.

It was a very quick read, though you do get a lot of story. At least enough to know that Will is learning a lot about where and how things can go very wrong when you follow these rules he's been given. It's clear that following them will only lead to more violence and death. It's also clear that he doesn't even know for sure who killed his brother, even though he feels sure about it.

I keep hearing in my head what my former Teen Librarian from a couple of years ago would say every time she read something about a black kid that involved the inner city and violence. She got very frustrated that the only black kids represented in teen lit lived in the inner city, came from broken homes, were involved in gangs, etc. So I do keep thinking about that. However, that's taking a broad view of teen books which, while important, isn't the whole story. This book itself is undoubtedly good. It's popular and has won awards. It really packs a punch. It says a lot with relatively few words.

At the same time, this sparseness of words is what I think kept me from getting into this story as much as I would have liked. I think I just don't love the novel-in-verse format. I know I loved The Good Braider, but that used a slightly different style of verse that was a little denser. Here, there really were just a smattering of words on each page. They were well-chosen words, but for me, I just like more of them, if that makes sense.

As a side note, I've heard that the audio version of this book, which Reynolds narrates, is fantastic. I considered that format, but it's only about an hour and a half long and I was looking for something to fill more hours of my commute.
This is the second book by Jason Reynolds that I've read (after Ghost, which I liked more) and I think I'll probably read more of his books. I'm especially interested in The Boy in the Black Suit and All American Boys.
Posted by 3goodrats at 8:00 AM