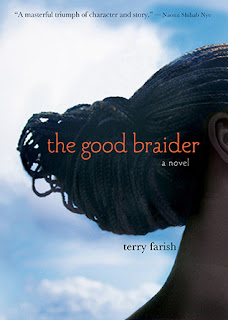 Growing up in war-torn Sudan, Viola lived in fear for her life and dreamed of going away to someplace safe. Her family had a cousin in Portland, Maine who promised to try and help them come to the US. Viola and her mother and little brother start their difficult and long journey and eventually they do make it to Maine. But now they face difficulties of another kind: fitting in to this new and very different world.

I'm always intrigued by stories of immigrants trying to make a home in a new and different country, though I don't come by them often. I've been wanting to read this for a couple of years, but kept putting it off because it's written in verse. I had imagined it would be like reading a very long, dense poem. But it's not at all. Here's a sample:

Women come to our courtyard for my mother's braids.
When I was young my little fingers
rode on her long narrow ones.
Her fingers danced over my cousins' hair like feathers,
shaping twists and lines with a single tiny bead
slipped on the end.
I learned to braid by feel more than sight.
My mother calls me by two names, Viola, for Jesus,
and Keji, for firstborn girl.
"All men in Sudan will want to marry you," she used to say.
"You are a girl from Juba."

That is much easier and more pleasant to read than I had expected and I now feel more encouraged to read books written in verse. They aren't common, but another I've been putting off despite my interest is A Time To Dance by Padma Venkatraman which I now feel much more likely to read.

Although she uses very spare prose, Farish somehow manages to convey the sights, sounds, and feelings quite intensely in just over 200 pages. I read this book in a day, but the images will most definitely stay with me for much longer.

The reader isn't spared from the violence of war in Sudan, though it's also not described in graphic detail. It's not necessary; we know what happened and it's still upsetting. When the family arrives in the U.S., they face a quite different set of struggles. Viola is relieved to be safe and to have a large apartment and a job and school. But when she tries to make friends with Americans and learn their ways, she comes up against her mother's strict rules and adherence to African traditions. Those traditions even conflict with the law at times. This cultural clash is reflective of many newcomers to this country, though we generally just expect everyone to assimilate immediately. This story illustrates how difficult that can be.

When I learned that the author is a white American woman, I was a little disappointed. On the other hand, she did an impressive job of creating a voice that is surely very different from her own. According to the acknowledgements, she has spent a lot of time with Sudanese refugees in Portland so it's clear this wasn't a project she took on lightly. I don't know of any other books for teens on this topic so I'm definitely glad she wrote it!

Anyone who enjoys teen books and wants to read more about other cultures should definitely give this book a chance.
Posted by 3goodrats at 7:30 AM