All the Ugly and Wonderful Things

All the Ugly and Wonderful Things by Bryn Greenwood (2016) 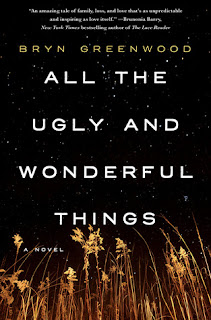 This rather divisive book is about an unusual and troubled young girl named Wavy, whose parents don't really look after her. A family friend, Kellen, who works for her dad starts to help her out, driving her to school and whatnot. She becomes pretty attached to him and by the time she's 13 they're pretty much having a romance. It never really says how old he is, but presumably he's in his early or mid-twenties.

Wavy's father is a meth dealer who is technically still married to her mother, but lives down the hill with some other women. He's pretty horrible. Her mother is just a mess, drunk and passed out all the time. Wavy and her little brother are pretty much left to fend for themselves. Also, her mother drilled some things into her head early, the result of which are that Wavy refuses to eat in front of anyone and hates to be touched. Kellen is really the first person who ever really took care of her, and I can see why they developed an affection for each other so early. At any rate, a lot of things happen that I won't mention but things come to a head and there's a reckoning, and that's still only halfway or so through the book. So it's not just about their relationship, but lots of other family stuff that's wrapped up with jealousy and violence.

The story is told through many different perspectives and, surprisingly, the many points of view worked here. We got Wavy's perspective a bunch, and Kellen's, and Wavy's cousin Amy's, but also people like cops and court reporters who only appeared once. Generally I find that confusing because it's too many characters to learn, but Greenwood did this in a brilliant way because you don't have to get to know all those minor characters or keep them straight. Their perspectives are just there to give you another part of Wavy and Kellen's story from an outsider's viewpoint.

So yes, it's about a relationship between an adult and a 13-year-old so I guess it's not for everyone. Judging from the Goodreads reviews there are people who find the very idea so horrific that it doesn't matter how well the story is told, how nuanced the characters, or how fictional. Interestingly, the author also had a relationship with an adult when she was that young, one that she describes as loving and consensual, an experience that informed the relationship between Wavy and Kellen. Although some would insist that any relationship between people of these ages are wrong no matter what, I think there are all kinds of people and all kinds of relationships. Human experience is diverse and full of possibility. Greenwood expertly captured one of those possibilities in this story, and I won't forget it for a long time.
Posted by 3goodrats at 1:32 PM